"But ask now the beasts, and they shall teach thee"


Neither the bloke in the taxi rank or the taxi driver he availed, I think, entirely believe me when I say I'm not actually a Furry and I'm only visiting The Hinckley Island Hotel to see friends. "Funny bunch alright," the cab driver tells me, his eyes never meeting mine for more than just reasons of the road ahead, I suspect, "But each 'is own. Lovely people; can't fault 'em."

My first Furry convention. Not something I thought I'd ever say or write. I'd try to frame my decision as Gonzo journalism, but that just invokes images of the Muppets. 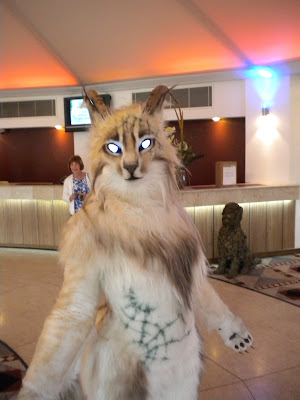 Outside hotel reception, humans in dog and deer and dragon costumes wave at passing vehicles on the motorway; Disney characters invading Ballard's mindscape. Drivers wave, truckers honk horns and--quite possibly--an ex-alcoholic thinks he's having some hideous relapse and keeps his eyes locked on the road ahead. One or two cars, I'm fairly certain, circle the hotel for more.

Lessons gleaned thus far? No one fears a Furry. Not even the citizens of Hinckley.

Inside I meet up with my American pals Kyell Gold and Kit Silver, plus their friend and writing colleague Foozzzball. None of them are dressed as animals (indeed, the majority here don't). Instead, they dress pretty sharp. Kyell is one of this year's Guests of Honor, mainly on account of his fiction in the field. 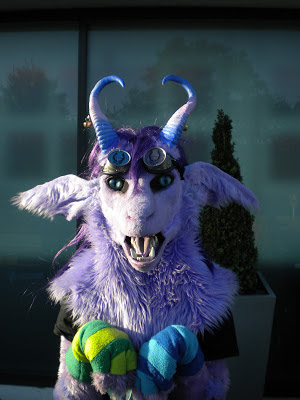 Kyell and I were housemates at Clarion UCSD together. Like me, he's an aspiring SF/F writer. Here, however, at Confuzzled 2013, Kyell is a rock star. People keep coming up to ask him to sign books, or to tell him how much the Dev and Lee series means to them. One young guy even has to be chaperoned over to K on account of (according to his friend) 'being too scared to say hello to Kyell Gold'. I'm astounded. And not a little envious.

"How can you be scared to meet me?" Kyell asks him, smiling and indicating the AD&D stats on the fan's badge. "You've charisma 15. See?" 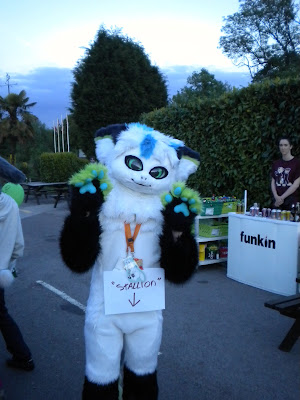 Lesson #2: creativity is the currency--and the very life blood--of the Furry movement.

"Furry has no foundations, no bible," Kyell tells me later, "there's no series to adhere to like Star Trek or Doctor Who. Everyone's ideas are equal. And equally celebrated."

Foozzzball compares it to Renaissance Florence: "So many imaginative people pressed tightly together, it creates a wild feedback."

Certainly, judged by artists per capita, Furry punches far above its weight, arguably exceeding any other fandom. Which makes sense:  if you suspect some fabulous chimeric persona within you, it'd be handy to be able to draw it.The gratifying thing to note is (judging by all the scrapbooks), so many others want to draw it for you too.

On my way back from the gents I wander past the 'Fur room'. Here, the costume wearers, the 'suiters', take a break from behaving like beasts. Friendly beasts. A group of fantastic animals--their heads temporarily decapitated to reveal the humans beneath--crowd around a huge fan that's been set up, drinking mineral water and talking anime. The price of some of these fur-suits can rise up into the thousands. I'm told some of these costumes require a chaperone to guide the wearer about, their eyeholes being so tiny and their appendages (horns, wings etc) being so wide. These are dedicated people. 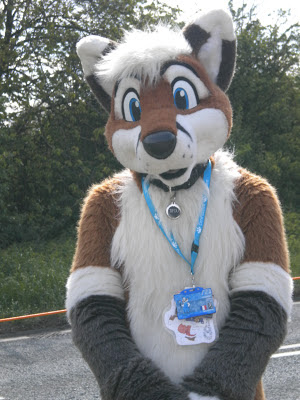 It's a wide umbrella, this anthropomorphism gig. You could be into the literature and never watch one of the dance contests, and vice verse. The only thing they share is the same desire for immersion. Pretty wide in the geographical sense too: a substantial US presence--as with any significant British fan convention--can be discerned if you hang around the lobby, whilst the European Union functions triumphantly here, UKIP be damned. Gender seems balanced, or at least approaching parity. No fandom convention, it's fair to say, is racially representative but furryism would seem to stand among the more successful in that regard.

In the line to the dance contest I'm plied with vodka tea by a deer with a giant hip flask. He doesn't break character even when security questions him jumping the queue. His suit's mouth doesn't move when he talks (some of the modern ones have ones that do. The back-in-the-day suits didn't, thus the tradition of  mute, cute chimerae) but, with help, he can swallow shots from the flask.

Talking to some guy with a handle like 'Matza' I think, he tells me he got into furry via the possibilities of tabletop role-playing. "But there's no one clear path. Groups of furries emerge for all sorts of reasons." The internet, of course, is cited as Furry's cultural nova, its Athenian golden age. There's an atmosphere of sheer possibility, here among the tablets and WiFi. People talk of a breakthrough--some day--into fandom's mainstream, or even the mainstream itself. 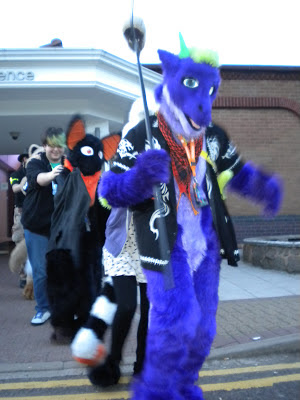 The dance contest hall fills with attendees. Kyell has been asked to be one of the judges; the happy noblesse oblige of GOH-hood common to all weekend conventions. I find the next hour or so to be tremendous fun. Some of the moves the more dance-orientated contestants pull are brow-raisingly, mouth-slackeningly impressive, given the hirsute battle armor. Other acts are a little more abstract: a spaniel with a model plane, two Alsatians alluding to Morecambe & Wise's Singin' In The Rain parody to an entirely non-British board of judges (props to the contestant's efforts though- they didn't do badly). The prize for single dancer goes to a black wolf with glowing red claws. Word has it they've worked for it.


"My soul is wrought to sing of forms transformed
to bodies new and strange!"


Waiting at a deserted Hinckley train station later, I weigh up what I've seen.The furry movement, as a wider social context, is in essence the struggle of willpower versus public scorn, albeit of a lighthearted kind. The furry community is perhaps wisely skeptical of the wider media, citing the much disdained CSI episode, Fur and Loathing and its portrayal of an orgiastic fandom.

But scorn and derision arise more commonly from slight rather than huge differences and perhaps we in the the rest of society--both online and tactile--could do with studying ourselves here. 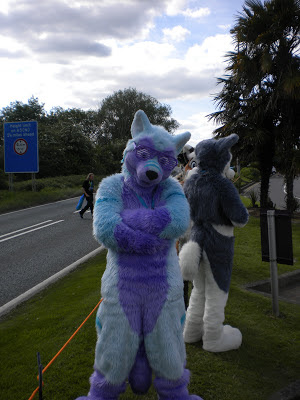 Technology exists for the continued betterment of humanity, but stare long enough and you'll see our species subconscious desires seeping through. Our urge to fly, for instance, to invent the plane and the helicopter, are expressions of our protean tendencies, the desire of our ancestors to sprout wings and so escape the horrors of the ground. The joys of the automobile (with its fandom beyond measure) owe something to how the driver is lent an exhilarating sort of giganticism. 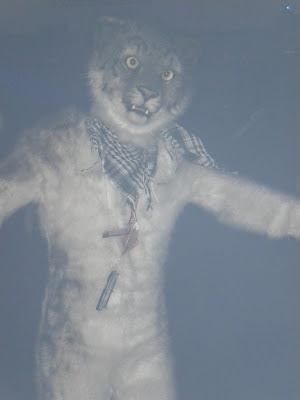 The thing about having one shape, one physical identity, is that it's a drag, a real f**king drag. Behind all the world's cultures, behind all its national borders, its racial and gender and sexual divisions lies that fact, quiet as it is. We ache for many facets, one way or another. Ovid's Metamorphoses, as we enter the age of Second Life and Skyrim, increasingly resembles science fiction rather than mythology. Sooner or later, one senses, through either virtual reality or genetics or body modification or a combination of none, we shall emerge and fly from our birth-forms. Or keep to them, if so willed. It's the act of choice that's significant. People who'll soon be wearing googleglasses call this 'transhumanism'.

The Furries, I think, sense this future and are in the business of running toward it, or at least a facet of it (and what more fitting a way than our remote ancestor's animalism?). But the future is reliably dim, and one always has to run into it with arms stretched and hands searching. That always looks odd on first glance. 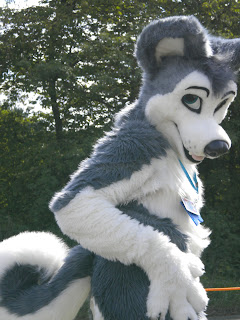