Long time spool readers (yes they DO exist. Shut up) will recall a post I did on the hapless cliches and general bullshit of the SF-lit blog community. I thought it might be a good (and popular, community-bridging) exercise to go back and check up on the state of the arse. And where better than the latest flame-war, the first casualty of which is almost always the English language.

"Anyone who's seen photos of Bea from the 50s knows she was a knockout as a young woman."

"During its first few years of existence CFG was populated exclusively by men. Then Bea joined. Then the members' wives got a look at Bea in her swimsuit at the 1950 Midwestcon. Then the club's makeup changed to the 50% men and 50% women that has existed ever since."

OK, maybe I made that last one up. But I'm not a member of the SFWA and I don't have a copy of the bulletin to hand. I'm told Love Wizard and Wingman refuse to put anything on the net, due to it being filled with 'Darn Lesbian Nosferatu'.

And so it came as a genuine shock to the boys and the SFWA (who tried to balance the piece with a cover of a barbarian woman in a chain-mail bikini) when people chided them for their old-time attitudes. Old hands at the game, they seized this opportunity to unleash the Ur-cliche of all those under critical fire: 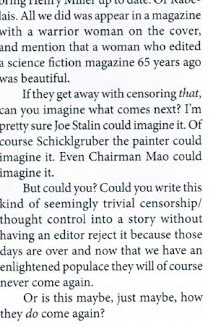 In case of emergency, smash the glass and grab the Stalin analogy. Warning: may contain hyperbole.


Would a brave and reasoning knight come defend them? Well, until he arrives, Resnick and Malzberg will have to make do with ol' racist, sexist, nineties-fixated, face-like-a-hen's-egg-filled-with-tepid-vomit Vox Day in this, his sober and level-headed post, 'Seriously Fascist Women's Association'.

Day cut and pasted a long list of "the most censorious liberal fascists in the SFWA". Day (who never ceases to inform us he is  'highly intelligent... and can still out-sprint most men 15 years younger') doesn't cosplay all that much. But when he does, he does so as Senator McCarthy.

Eager for the cliche crown, Day finishes off by dropping some Tea Party beats into his general rabies:

"It shouldn't be long before all criticism of  the Obama administration are banned in the SFWA Forum."

Hell yeah. Have you seen Barrack in a two piece? Bea ain't got shit on him.


A writer pal of Day's (using Morse code from her bunker) adds:  "And they have no memory of the past and want to erase it (Spool note: Say whu-?).  Which is why by keeping alive the memory of SF, Mike and Barry MUST be silenced."

That's Sarah Hoyt, who later, (and presumably smoking Ayn Rand's ashes through a Prometheus award) has this to say about the critics:  "Maybe they feel inadequate compared to the giant women of the past, who made it big despite working in offices where pinching your secretary’s bottom wasn’t out of line."

Well, in fairness, they were Giant women, Sarah. They were probably more concerned with getting their husbands out of that oven two lost children tricked them into with magic beans.

Here, clearly, is a woman of, er, real nuance when it comes to gender politics:

"(These people are) the sort of person who thinks “because I have a vagina is a winning argument in every circumstance, instead of just the trump card on an argument with your significant other on who is going to do the dishes."

Or how about some classic pseudolution cliche? "Women don’t like confrontations.  I think this is evolutionary, baked in the cake from when the pregnant female needed the help of the band.  Women are likely to go around, give hints, and try to solve the problem by other means. "

Not only does Hoyt achieve pseudolutionary cliche nirvana here, she does so while suffering a bout of amnesia as to the very character of  the people she was originally criticizing. Maybe, like she said,  Hoyt has no memory of the past and wants to erase it.

More Hoyt wisdom: "You want to compete?  You have a dream of making it in science fiction?  Then shut up and write.  And stop being convinced everyone is making you a victim because you have a vagina."

(On a personal note, this is singularly the best writing advice I've ever received. I've really no excuse now)

So the boys and their defenders owned all the classic cliche. But their young gun critics delivered in terms of faddish, seasonal banalities.

*headdesk* and 'Teh' (as in 'the') were inevitable. I've long made my peace with that. Death and taxes etc.

Some cliches, though, seem to have mercifully gone extinct. No one, for instance, accused anyone of 'showing his/her/your ass', a chestnut that ran rampant across 2010's #Racefail. More shockingly, 'fail' (used as a noun) only appeared a measly three times, thank Baal.  The curse may be lifting. There was only one elephant in a particularly lonely room, too.

But by far and away the most overused, gawdawful, help-itself-to-your-reading-tolerence's-last-loo-roll, stock phrase was 'Old men yelling at clouds', a homage (or 'rip off') of a Simpsons episode. Reflected humor is a beautiful thing, here allowing critics to pound two chauvinists with a lump of ageism.

I bumped into it reeeepeatedly while searching. Oh yes. A Trick Of Light blog is typical of the genre:

These Old White Men start yelling at clouds and suddenly (SFWA's) work doesn’t seem to count for anything. That’s not right. It’s not right on top of a whole pile of things that aren’t right.

(readers will soon note there is indeed a pile of something alright, and FOX television want it back)

Angela Highland earned extra points for: "the same sort of cloud-yelling, cane-shaking, rampaging sexists that can’t deal with the notion of girl cooties all over their precious rocketship stories." with its ladling of emergent jejunette ‘girl cooties’ into the mix.

Girlie Jones painted us all a bleak, dystopian future:  “Old Men Yelling at Clouds” btw should become the actual term for this stuff". Clearly a boot in the face of humanity forever. Or maybe that should be an old sock.

Not satisfied with letting this phrases’s once-lighthearted corpse hang from its gallows, Roqoo depot accompanied his blog post, Old Men Yelling At Clouds, with a most amusing ‘meme’, press-ganging a popular photo-meme of Sean Bean in GOT with the popular meme caption ‘______ is/are coming’ (for this one insert ‘lady writers’). The idea being Mike Resnick is a bit like Sean Bean. A sexist Bean. Not Bean the man, Bean the Meme.

Y'know, It was actually a funny episode...

Despite the progressives wide platter of faddish arse, I feel one has to come down on the side of the lady-lovin', cognac-sipping forces of sexist regression, who really pulled out all the stops to bring us classic mad men-era broad-analysis swiftly followed by perhaps the most pitiful attempt to duck and hide behind George Orwell's mustache yet known. None of yer modern tat, oh no! This stuff was old when Heinlein and DeCamp were scribbling Rice Burroughs fan fiction. You know that feeling of admiration mixed with pity you'd feel whenever they wheeled WWI veterans up to the cenotaph? Exactly that.

However, individually speaking, hats off to Foz Meadows, who nobly climbed over the hurdle of being morally right to bring us a startling piece of boilerplate, cliche-blistered 'snark' (as the kids call it. Well, by kids I mean 30+ year old people with a Wordpress account. Bloody Wordpress).

In--you guessed it--'Old Men Yelling At Clouds', the author deep-fries her words in that blog bromide people are want to call 'Fisking'. 'Fisking' is when you cut and paste someone else's article (here, Wizard and Wingman's aforementioned gyno-Stalin freak out) and then intersperse it with your own 'snark'.

The upshot? The blogger gets to think they're Jon Stewart. The reader has to amble through stodge. 'Fisking' is a boom industry in Blogland.

Nothing wrong with the structure then. Jobsagud'un. Check also: a warning about 'explosive ranting' (Call the bomb squad!), a '*headdesk*', a 'teh womenz', an inappropriate yet increasingly de rigeur rape analogy (other similes are available, viewers!) and another 'old men yelling at clouds', though Meadows nearly scuppers the deal in the same paragraph by flirting with originality.

(A non-cliche-related note, but there's a bit where she says a Resnick story about a true messiah materializing 50 years from now is 'debunking Judaism'. Now I'm no theologian (unless you count those 20 years I spent under the tutelage of Maimonades), but surely he'd be (notionally) debunking Christianity with that one? Am I missing something here? What if I wrote this last question in italics; would that help?)

A worthy winner. But it was neck and neck with many other contenders--both defensive and critical--and, ultimately, it was the taking part that counted. Probably. I'm sending a desk and some bandages to all entrants.