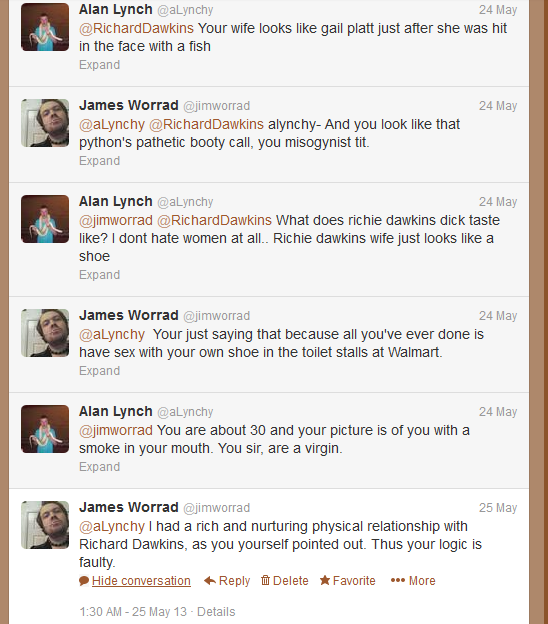 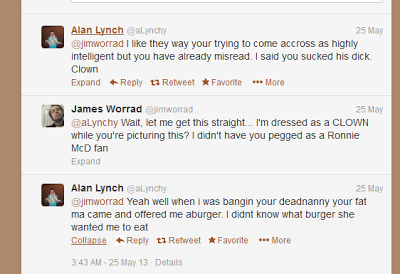 Yep, another day another Twitter drive-by.  I'm not proud of it (I swear!) and normally these days I wouldn't post it here or, well, anywhere.

But here's the thing. Mr Alan 'Bobo' Lynch flung his first filthy tweet here through the bars of his cage right in the middle of another Richard Dawkins brouhaha (Very probably unknowingly: I wouldn't credit the guy with riding any particular zeitgeist, only a garishly-painted collapsing car with twenty of his mates climbing out of it) that one of Dawkins's tweets kicked off.

You can find a good clear summary of the micro-blog skirmish here (You'll find me in the comments wasting people's time as per). In roughest summary it was about RD being sexist/racist or at the very least being perceived to be sexist/racist. To be embarrassingly honest I'm not confident enough to argue it either way. I don't have the noble pugnaciousness of a natural social progressive warrior and neither do I sit around in mens groups sniffing my comrades' armpits and screaming 'Misandry!' at anyone suggesting, y'know, that the world might just,  just, be biased toward men.

(Hopefully, this here post proves I'm not some zombie to every stroke of Richard Dawkins's keyboard either)

So I merely lurked, watching the acid and vim fly from the safety of my cyber-thicket. What I noticed was Alan Lynch's first tweet floating in the top twenty tweets concerning RD at that point in time. 'Mannn...' I thought, 'You are soooo going down, pal,' happy in the knowledge (at least) one of the social justice peeps would dispatch him with suitable humour.

I got on with my life then went back about two hours later to see him burn. Lynch was now in the top thirty; a drop, admittedly, but still (for whatever reason; I don't pretend to grasp how twitter works in its entirety) riding high in the charts. And wholly untouched. Like a bleedin' Ming vase in the Guggenheim in fact. And that's where I leaped in and lowered the tone. Well... someone had to.

B-b-b-but... what happened? Here was a clear-cut misogynist attacking a woman for her physical appearance slap-bang in the middle of a raging debate about whether someone else was being technically misogynist or not. Clearly it would be wrong of me to pick out any individual SJW for such flagrant dereliction of duty because, well, they might not have seen it. But when one considers possibly hundreds of SJWs were engaged with the subject of Dawkins--and Alan Lynch went unchallenged--one can't help but feel short changed, cheated even. That cliche about action in relation to words and all that.

(A part of me, an ugly cynical part, wonders whether if some, SOME, of the people challenging Dawkins moved over Lynch's mindburp and swiftly forgot about it because he was a temporary ally of sorts. Dawkins was the enemy, after all, and anyone who worked toward psychologically destabilizing Dawkins was all for the greater good, no matter their message.

Personally speaking, it drained the life out of proceedings. Suddenly, what had until recently been a collective of individuals perceptively harrying Dawkins's preconceptions became oddly akin to a chunk of hipsters saying 'Gawwwwd, RD ACTUALLY thinks Doolittle is The Pixies FIRST album!!! #LOL!!!'

It's not a massive #fail (to use a tired internet wit-prosthetic a moment) but it IS a #fail. Such soft-bellied complacency erodes us all and is symptomatic of assuming one always owns the moral high ground. Truth is, no one gets the deeds to any moral high ground. Rather, it has to be earned. And earned daily.