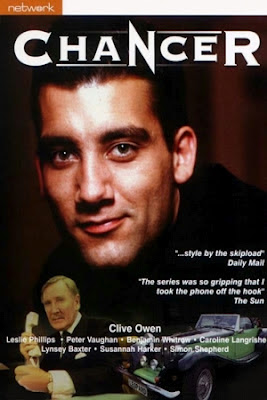 1- Acquire membership to an exclusive and swanky London bar that Clive Owen, star of ITV's 'CHANCER' is known to frequent, for example, Mortons in Mayfair or The Groucho Club, Soho.


2- Drink repeatedly and wait for Clive Owen to enter.


3- As Clive Owen (of Chancer fame) approaches the bar, say loudly to your acquaintances "Hey, look, it's that bloke out of CHANCER! F*ckin' Chancer, God,do you remember that show? Wunnit shit?"

*-Say "Ere, look at this Chancer."
*-Impersonate the cheesy-suave voice-over man from ITV back in the 90's and say "Chancer; Thursday at nine on ITV."
*-Impersonate the voice of Clive Owen in Chancer and say "Crane's Law, rule number one- Chancer was shit."
*-Strut and sing like Tina Turner, singing: ''He's a Prahhhvate Chansah/ A Chansah for monehhhy/ Cuz Chansah the serrries was poo...''
*-Buy some ludicrously overpriced London pistachios and start flicking them at Clive Owen, saying "Chancer, chancer, chancer!"

Or, alternatively, create your own obnoxious jibes. The main thing is to have fun and not get thrown out too early.


5- The object of the game is to get Clive Owen, now red faced and possibly held back by staff/friends, to shout 'NO, MATE! YOU'RE THE F*CKIN' CHANCER!'


6- CONGRATULATIONS! YOU HAVE BECOME...