Nations are essentially narrative constructs, masks layered with centuries of paint. Or some clever-sounding shit like that, I dunno... 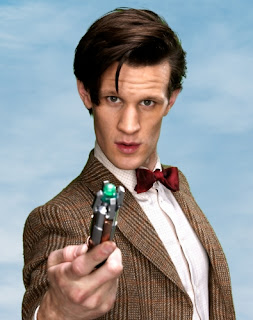 But it's certainly true a culture's stories project its nature to the world or, at least, how that culture would like to be seen. It's better to tell these stories yourself than someone else do it. Modern, vibrant Ethiopia could warn you as much (no thanks to Live Aid) as could modern, humanitarian Germany.

But why is it some stories are embraced by other nations and others ignored? What qualities ensure certain memes adhere to the global wall?

Questions which, with regard to my own country, bring me to James Bond and Doctor Who. Titanic totems of old Albion, the pair of 'em.

Both characters owe a great deal of their foundations in the world war: Ian Fleming had a hand in inventing exploding dead rats for the UK's special operations, for instance, whilst the good Doctor is an avatar of the Bletchley Park/ Turing/ Boffin-in-his-shed-tendency (It would be too obvious to note the chimeric quality of his enemies the Daleks, a Frankenstein-like cocktail of Waffen helmet and Tiger tank). 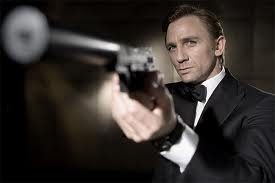 But it's not so much the war itself, merely its effect. JB and DrW are Britain rebooted, the same old Etonian riff but filtered through the Blitz. The difference is the Doctor represents a Britain that actually learned something from it all. Bond carries on with the same old imperialism, all he's learned is to drop the gunboat and pick up a Walther.

Some people will tell you Doctor Who is no less imperialist.These people are typically of the political flowchart brigade, who reason if something's British and popular it must therefore be Cecil Rhodes lovechild. Interestingly it's a viewpoint that exists on both the left and right of fandom's blogosphere, the only difference being one cohort sees it as bad, the other, good. No one ever seems to ask whether it's true.

Sorry if I sound churlish. But I feel they haven't taken into account (or not heard of) something I take to be Who's quiet inspiration:  the post-war Labour government, AKA the creator of the NHS, AKA Britain's true finest hour, AKA Fox News' greatest nightmare made-manifest.


Doctor Who is Clement Attlee with a time machine, Aneurin Bevan with a plot-slicing screwdriver. A Gallifreyan Orwell, if you will, with less 'tache and more quips. An anthropomorphic embodiment of that spirit of '45, that brief moment when the nation grew up and realized each person within it was their brother's/ sister's/ sentient life form's keeper.

It pleases me greatly the rest of the planet has swallowed that noble pill coated in fiction. It's a valediction of that better, gentler part of 20th century British socialism. After all, have you ever heard of a science fiction series influenced by the 1953 Tory cabinet? Nope, didn't think so...


So far, so SF blog. Yaddah, yaddah, Dr Who, yaddah, yaddah, cultural significance.  But what about the opposite side of the coin (Whoops: cliche!)? What about cultural icons that--mysteriously to us limeys--leave the world cold?

The post-war hangover produced another archtype, an idiotic and useless cousin to Messrs Bond and Who. Unlike his two crisis-solving, ever-zipping about relations, he has no one main locus, continually reincarnating--Gallifrey style--in successive sitcoms. It's difficult to nail the guy* in a phrase but one could loosely describe him as the pompous yet somehow loveable buffoon.

The Ur-text of this buffoon is surely Tony Hancock (the actor and his character share the same name). Biographer Roger Wilmut describes him thus:

During the fifties and early sixties the UK would cease functioning whilst Hancock's Half Hour came over the radio and, later, the telly. Understandably, for it was brilliant--a chamber music for the mind--in both writing and performance (Here's a very brief clip of him doing jury service).

But it ran deeper than that I reckon. HHH is the product of a culture that had finally learned to laugh at itself after centuries of hypocritical, murderous flag-planting. A country redeemed by absurdity. That it took a world war to achieve that is depressing, but...

The buffoon's current incarnation is Steve Coogan's magnificent gargoyle-in-slacks, Alan Partridge, a failed, bitter chat show host waddling blindly in his own in inconsequence. Partridge is less likeable than Hancock, but I think that's proof sitcom audiences have become more nuanced. Beneath Partridge's mean-spirited, self-interested shell one senses a terrified child adrift in a hateful world.


Bond and Who are what we Brits try to project to the world, but Partridge and Hancock are who we actually suspect ourselves to be. The odd thing is, the buffoon is not something we've actively tried to hide. The rest of the world, generally speaking, just doesn't particularly care for him (David Brent, is the exception proving the rule. His vileness only sells in the US because it's hid among a pot pouri of more likeable characters). Maybe, given our seat on the UN, it's too scary a thought. Better the suave secret agent. Better the zany alien.

Alan Partridge has a film coming out soon. I'm fascinated to see how it does abroad (Curb Your Enthusiasm gives me hope the US might take to him). I'm hoping, in this internet age, for my country to become a little more transparent.

I'm happy whenever one of my non-British friends says they like Dr Who, really I am. But when they profess a love of Alan, or they quote Tony, my heart kind of swells. I feel like I'm accepted for the buffoon I am.


*For some reason thus far he's always been a guy. But I think the climate is soon to change on that one. At least I hope.