"Execution needed;
A bloody vessel for your peace.
If man makes death then death makes man
Tear the torso with horses and chains...

All I preach is extinction." 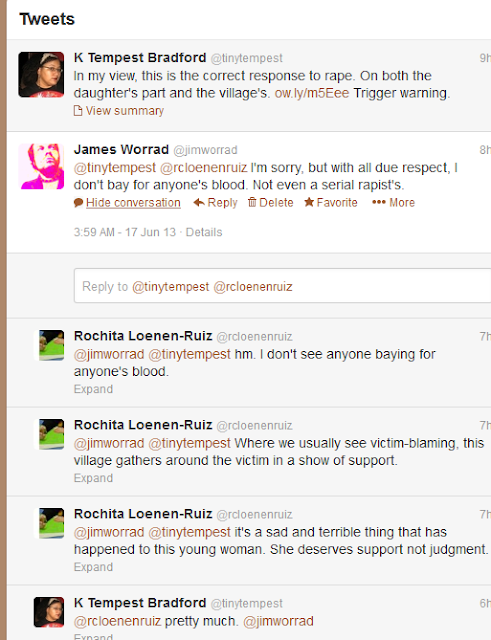 For reference, here is the article K Tempest Bradford alludes to (though I'm loathe to link to right wing newspaper, The Daily Mail. British readers will already know the DM doesn't exactly have the best track record on women's rights, but that's by-the-by)


You know, I think it's the fact my opinion can only be contextualized as a judgement of the poor girl that's most depressing. In regards to the current state of the left (well, SF's left), I mean. The old order changeth, and the new order coarsens daily.

I'm not judging the girl, that much should be clear to anyone. Killing her prior and would-be rapist was a wholly understandable--and immensely brave--act of defence that no right-thinking, merciful court would ever condemn. Her neighbors showed, and continue to show, astounding compassion in protecting her.

But let's get one thing clear:  there is nothing, absolutely nothing, to celebrate, to heft up like a shining standard and call 'a correct response' in this tragic and depressing story. It's a series of horrific, de-humanizing events; the first lot unimaginably sadistic, the rest a necessity that must have left all involved psychologically scarred for life.


Now that's a right wing opinion, however you cut it. In fact it's about as right wing as it gets: a knee jerk, old testament-infused call to culture-wide violence untethered from any court system, mental health considerations or enlightenment values. It fits far more comfortably in the mouth of  Limbaugh, Hannity or Littlejohn than any SF fandom progressive (which, on any other day, K. Tempest Bradford is. From what I see she does a lot of good work). And, like any gore-hungry statement uttered by those three conservative 'pundits', it has to swiftly duck behind a wall of brutalized innocents to justify itself.


You can see its attraction though (It was re-tweeted and favorited numerous times). It appeals to that little worm in our hearts--mine included--that desires nothing more than a monotone retribution with all of life's uncomfortable nuances shaved off. It's why the Deathwish series was so popular. Indeed,  the first film's essence is caught in that sentence and improved, going so far as to cut out the middleman protagonist.


I'm no expert on Papua New Guinea, but I'll take it as read raping one's child is counted as an abhorrent act there, as with any human society.

So how does it happen? How does someone become an incestuous serial rapist?

Well, first you have to be an extreme sociopath and one becomes a sociopath either through deformities in the brain prior to birth, being brutalized as a child or a cocktail of both.

Let's, for the sake of argument, accept a duality of the mind and body a moment. Now let's place K. Tempest Bradford's or Rochits Loen-Ruiz's mind--at the point of expulsion from the womb--into the girl's father's skull at the point of his birth. They would be rapists by now. As would I, as would you. The neuro-chemical and social realities of that scumbag's life would guarantee it.

Unpleasant to think that isn't it? As humans, we try to avoid these facts, despite science shining it in our face. It goes against thousands of years of spiritual and common sense thought. And yet we have always suspected retribution to be ultimately hollow, haven't we? Scientific fact proves that hunch. Scientific fact, increasingly, suggests our species do a little growing up.


I passed through my city centre before writing this, imagined how a modern society obedient to Bradford's spur-of-the-moment opinion might actually look (Recall she isn't just alluding to New Guinea. She means rape per se, in whatever context, whatever series of events. Presumably not all rapists would be killed by their victims in situ. Indeed, most deaths would have to be manufactured at some later time for practicality's sake).

Would all this justice be enacted on a plinth beside the town hall clock? The progressive crowd nurturing and encouraging the tenth rape victim into taking the first swing? Or would it be more private, more tasteful? A small installation on the edge of town, perhaps?

An absolutely histrionic, hyperbolic vision, I'll readily admit. But in my defense, it's bleedin' difficult to procure any other extrapolation from such an absolutist statement.


Do you want know what I think the 'correct response' to rape is? For what it's worth?  I mean in an ideal world (mine and not K. Tempest Bradford's)?

Rapists would be identified monitored and sectioned from society before they even came remotely close to their first victim. They would be treated with dignity in that sectioned off place because we as a society are not the sadistic, predatory beasts that they are. They would be studied, scanned, psychoanalyzed and cross-referenced in the hope that some day a cure--chemical or genetic--might emerge and allow them to become fully-functioning members of society or, in lieu of that, that the next generation of these beasts shall never emerge.

Is that weird of me to believe that? Wrong? Because, to me, to desire anything else is to mentally permit the cycle of brutality and suffering to continue forever. It is to condone it, if only subconsciously. That poor girl in Papua New Guinea did the right thing, but she didn't justice she deserved. Nothing 'correct'. Nothing like it. No one in that story did.

My 'correct response' may be a cloud cuckoo land, something absurd and impossible to reach. But running toward that--surely--has to be preferable to falling back into the same old right wing vengeance fantasy, no matter its liberal veneer.