Narcissistic, nineties-obsessed, corpse-in-waiting Vox Day has--all you SF snark-watchers will no doubt have noticed by now--exceeded himself this time, racially insulting author and fully-rounded adult N K Jemisin in scenes reminiscent of a cage-humping baboon howling itself to climax.

Greater minds than mine have commented already, though I will note that, for someone so creationist and anti-evolutionist (I suspect he has a personal stake in the latter) Day is surprisingly quick to wheel out Neanderthals as proof of his racist (and scientifically selective) theories. As ever, science is but a Chinese buffet to libertarians.

(Except, as the Waffenwonder says here, not a jot of his bile was racist. Vox Day tip: if you say something racist but don't SAY it's racist the PC brigade can't touch you. Not a bloody leg to stand on, mate. Go on; try it in your daily life!)

All this hideousness provoked me into ad hoc research (ie: cyber-stalking). I noticed Vox Day has a wife he refers to as--not Brunhilda, surprisingly--but 'Spacebunny'. Spacebunny. Yup. 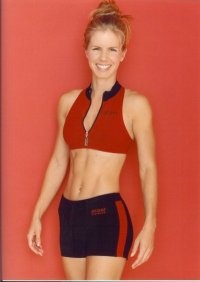 Oh, don't look at me like that. Day posted this picture on his own blog in a noble attempt to prove his wife was more of a 'hottie' than some other fantasy writer's (rumor has it if you've the hottest wife of all they hand you a Nebula award).

To recap, Spacebunny is married to this:

Intrigued, I typed Vox Day and Spacebunny into Google images, in the hope of finding a photo of them together so I might produce a set of commemorative plates in the style of HRH Charles and Diana. No such photo emerged. So I tried 'Vox Day wife'. Same again.

Then I noted another odd thing: both times the same old photo of Spacebunny emerged. In fact it appeared to be the only photo of the woman. A professionally-taken modelling photo apparently. Hmm...

She has a life outside Vox Day (as do we all, thank Baal's balls). Check her (locked, 50- followers) Twitter account: 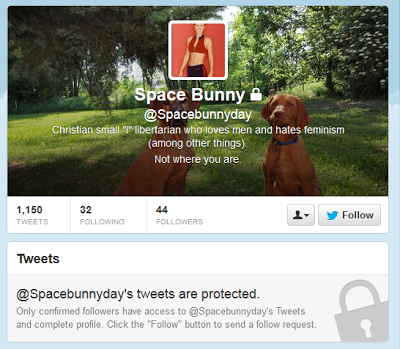 She sometimes emerges from her star-warren to have a go at people too. See this meme someone made about her antics:

It suggests an almost identical argumentative style as Vox Day's. And... what's this? Whoever made it used THAT photo. Like they even had a choice...

(At this juncture, one might also ask how someone so clearly camera-cozy appears on no other photo with a name to it?)

Faster than one can say 'elaborate sock-puppet', I'll bet you're ahead of me on this.

"But," I hear you cry (actually, I don't hear you; it's just a cliched figure of speech) "why would Vox Day lie about having a classically attractive significant other? Why go to such lengths? And how can you possibly hear me, sat as I am by my computer on a whole other continent?"

Well, I'm not saying that. Not even slightly, not even in the face of the fact Vox Day has a reputation for manufacturing sock puppets and fake reviews.

As well as his stodgy fantasy novels and by-the-numbers critiques of atheism, Mr Day has leaped on the 'game' cashcow-cum-bandwagon:  a burgeoning and lucrative business where some superficially charismatic, rohypnol-rattling 'dude' teaches us lesser men how to 'man up' and 'score perfect-ten chicks'

But--again, hypothetically--what if an 'alpha dude' had no 'perfect-ten chick'? Why, that'd be humiliating! But would he just stare into the mirror and consider oblivion? Heck no! He's the alpha-dude! He'd either go out and 'score' a dazzler or--and, boy, this is an uncharitable thought--construct a false inamorata with her own Twitter account and everything. Oh, and give her a name like 'Spacebunny' because a proper name might be checked.

Before Vox Day's minions (real and sockpuppety) pop up in here to burn me alive in a wicker model of their leader's phallus, I should add this post is no less spurious, cherry-picked and unscientific as anything on Vox Day's blog. Bullshit, it's technically called. But if Vox Day can say NK Jemesin isn't fully human, then I can say Vox Day's wife doesn't even fucking exist.
Follow up post here:  http://jamesworrad.blogspot.co.uk/2013/06/kicking-against-pricks-thoughts-on-that.html?m 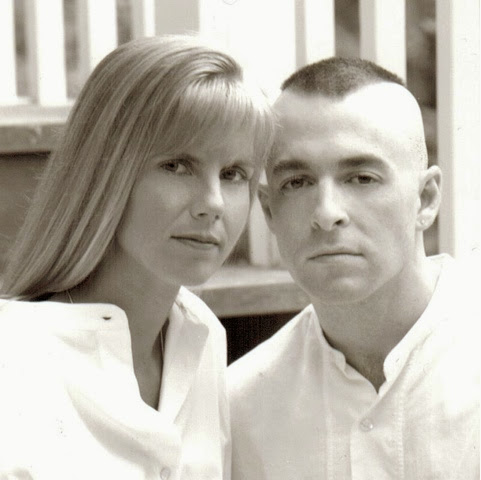 "You know, darling... I never did get what that last paragraph of Worrad's was about."
"Screw him, Ted. We have us. And Jesus. Jesus with a flaming broadsword."
Posted by James Worrad at 03:14