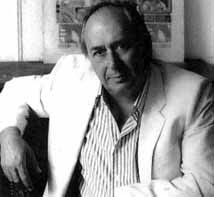 (A new game from the people who brought you Meta-Chancer!)

"Architecture, communications, transport, merchandising... these are changing the interior design of our sexual fantasies"

The powers that be have finally compiled a load of interviews with JG Ballard into a collection. His canon is incomplete without that, I feel; Jimmy gave incredible copy. Just go and Google it. You'll see what I mean.

Then take any one of his paragraphs. Their dream logic is impeccable: the first line draws you in with its sanity, the last line is equally logical and sane but by then you find your sanity has slightly altered. I know this because I've looked at the last line of his statements and, stood alone, they are the most delightful, scintillating gibberish.

In the light of this I've created a game called Six Degrees of J.G. Ballard. Below, me and my pal Aanant have devised some sentences redolent of 'Shanghai Jim's summary-type thoughts. See if you can find a way to construct a prior paragraph with one of them in such a way that they become decipherable, nay, inarguable  and profound:

*: By this I mean that Little Chef will be the Catholic church of the 22nd century, the £7.69 Olympic breakfast it's catechism.

*: The thighs of Kiki Dee, say, in their pliant stance of psycho-sexual defiance.

*: Which leads to a ceaseless desire to exist as an electron; a mere modulus within the demimonde of the concrete atom.

*: Elements of the mating ritual are present in any major engineering project or invention.

*: Of course, its mere existence serves to assuage the interminable beliefs entrenched in the anterior cingulate of any modern human biped. Just look at the Bullring shopping centre for confirmation.

*: In light of this, the vaginal nature of shopping trolleys demand a bleak sort of Gaia-worship.

Hard- a sentence of six words.

Good luck! Please feel free to display your attempts in the comments below. I won't hold me breath, though; I can't bloody do it meself!
Posted by James Worrad at 11:37