Forum visitors were asked for their memories of childhood during the Cold War... 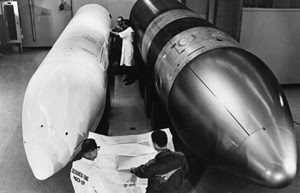 I had a friend who lived the Cold War paranoia so thoroughly as a child that, as a hobby, he would practice digging ditches in his backyard, in an attempt to create a space for a fallout shelter. I know it was this because he told me why he was digging. I didn't think much about it at the time but think about it sometimes now.

Some kid's grew up with tornado drills in the mid-west. I learned that if I couldn't get to an underground shelter I was to crawl under a table or desk, put my head between my legs and close my eyes until the sirens stopped and the all clear sounded. If the all clear didn't sound than I didn't make it or it was incapable of sounding and once the inevitable rumbling stopped I should locate the nearest triage centre and be checked for radiation while helping any other survivors along the way.  Not fond memories. I honestly do not like remembering either the "Get to Cover" or the "Survival aftermath" drills.

I kept waking up and finding my house surrounded by charred remains of humans. Then there was the thing where people would leave their shadow print on the walls. I mean, how does that even work? I would only wake at the sound of a whistling sound, you know the one where a bomb is about to land. Coming into the real world and I find that the teapot is the culprit. 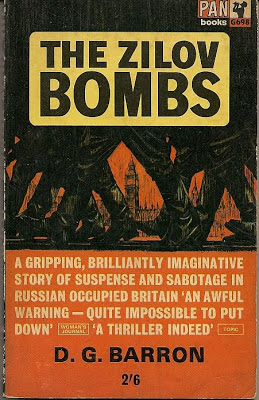 So from my experience I distinctly remember a distant but still palpable dread that seemed to be hanging over us - even 10 year old kids. By the 80's TV was being allowed to show realistic depictions of the aftermath, so there was Threads which depicted the destruction of Sheffield and the aftermath, then in real life there was the Falklands war, Soviet intrusion in Afghanistan, cruise missiles being deployed here in the UK.


As I read now SF from that late '50's early '60's period, it seems like the fear of nuclear annihilation invades every story. It is clear also, that even then, no one really believed the government propaganda, and people were certainly starting to question the idea that officials knew best. 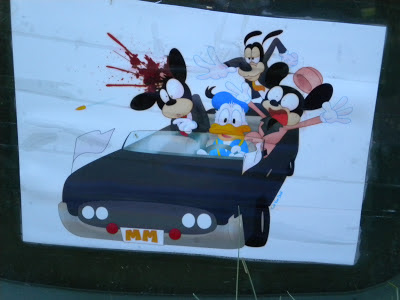 After moving up North and becoming more aware of the Cold War, I started having slightly more vivid dreams after I heard the phrase "Nuclear Winter". It started off with mild dreams like being surrounded by green glowing snow and having to wear a hazmat suit to go outside. After Chernobyl, there was heavy talk of mutations, so the dreams took on an extra level of vividity and, remembering my drills from Shrewbury, I started having this recurring nightmare that when the bombs came I ended up getting fused to a school desk and walking round like some kind of deformed desk-backed hunchback.

I remember watching some of the Protect & Survive videos at school - one of our teachers was clearly worried about imminent nuclear Armageddon and wanted to ensure that her young charges knew that building a den out of your sofa and the kitchen door was the best way to protect yourself from obliteration. I also remember a TV program (was it Survivors?), which dealt with the aftermath of nuclear holocaust in Sheffield. It was good on suspense, but didn't feel at all real, mainly because the acting was as wooden as the sets. The great joke for us was wondering how long it would take before anyone realized that someone had dropped a nuke on Sheffield.

A survival kit? So far, I'd go with the following:-

1. Stout brogues
2. An umbrella
3. Five pounds of Gawith's Rubbed Kendal Shag
4. A torch
5. Some string
6. Two bottles of cooking claret
7. The Observer Book of British Birds
8. A warm jumper
Have I missed anything?


I never understood that "nuclear clock" either. I'm quite sure it came closest to midnight during 'the Bay of Pigs' crisis, (and was still in the womb then) and yet during the late '70's and '80's it always seemed to be moved closer (and that at a time when the effects of a nuclear winter were understood and that no one could escape the effects a nuclear war.)
Perhaps it was because we were boys growing up in the shadow of a number of RAF bases and whose reading matter of choice was Valiant or Theatre of War comics ("so long, Fritz,", "Achtung, Englander! Aieeeeee" and all the rest of it), but we were young, stupid and British. The British won wars. It was what we were good at. So, what did we have to worry about? 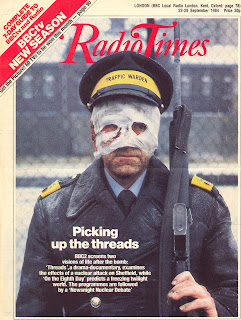 The Wall coming down was a Holiday in our house. I still remember I was grounded and we were eating dinner when the TV coverage began. My father instantly relented and let me watch and you could hear cheering all throughout housing and all over the base. I remember the phone ringing all night and my neighbours dad with tears in his eyes, a rather stern ensign mind you, repeating over and over "We Won!" and later Gorky Park playing live on MTV from Times Square. It was a whole new world.

(I did notice) a change in cartoons after that dreadfully dull week of watching nothing but some gratified wall in a pretend country being taken to bits by people who obviously didn’t know how to demolish anything.  Cartoons were less suspenseful, there was no obvious bad guy and my career as a beautiful spy who shagged Bond out of a few secrets was toast. (honestly what kind of 9yr old wants to shag some 20-40something guy with slick lines and a gun up his pants!! I'm beginning to think that was the real damage done to my childhood right there.) So I started practicing taking orders and running around with food in my hands without spilling it, so I could be a waitress and get rich on tips.
Posted by James Worrad at 03:45