On the Sunday of Eastercon, 2015, a panel was hastily convened to discuss the results of the Hugo Awards nominations. The nominations had been swept by The Sad Puppies/ Rabid Puppies slates. 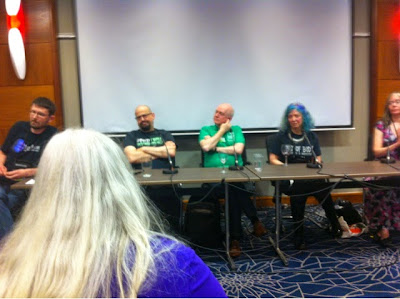 The Sad Puppies are, dependent on viewpoint, an attempt to shine light on overlooked authors and negate a perceived left wing 'preachy' bias within the Hugos, or a right wing assault on an honoured institution (US culture war toxicity, if you will, overspilling into the global conversation). The Rabid Puppies--and it pays to perceive at least some difference here--make few bones about being extreme right wing.

The panel consisted of Charlie Stross, Kari Sperring, Gaie Sebold and Vince Docherty. All members (indeed, the entirety of the large audience it transpired) were puppy-cynical at best. An attempt to find a pro-puppy panelist at such short notice and within a British convention would, in truth, be like looking for a woman on a PUA forum.

Spool Pidgin was on the second row (let's face it we're a second row kinda SF blog. We've come to terms with that long ago) taking names and firing tweets. And here they be. Sadly, due to incompetence, I haven't figured out how to swap tweet results the right way around so, dearest reader, I ask you to read from the bottom up. 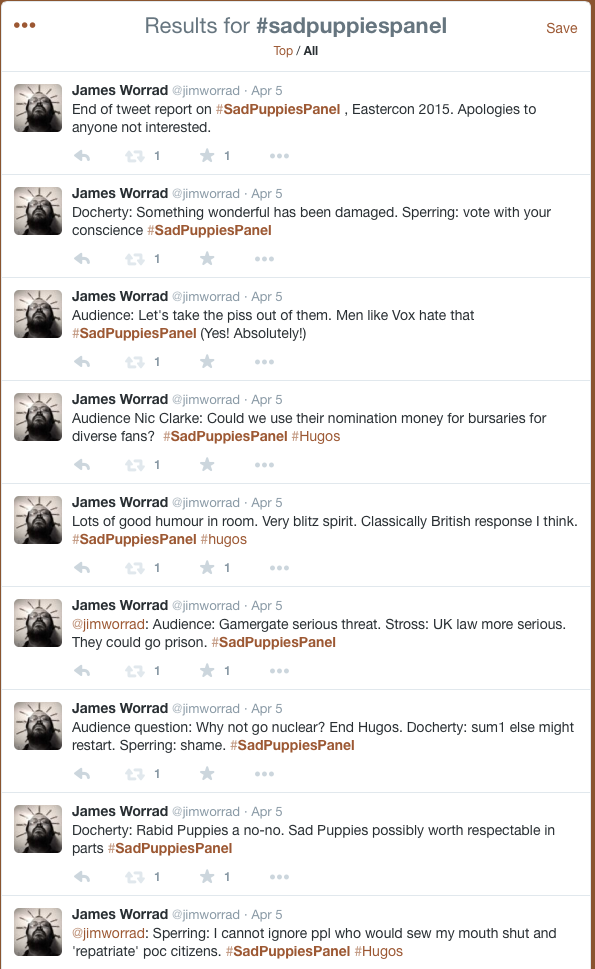 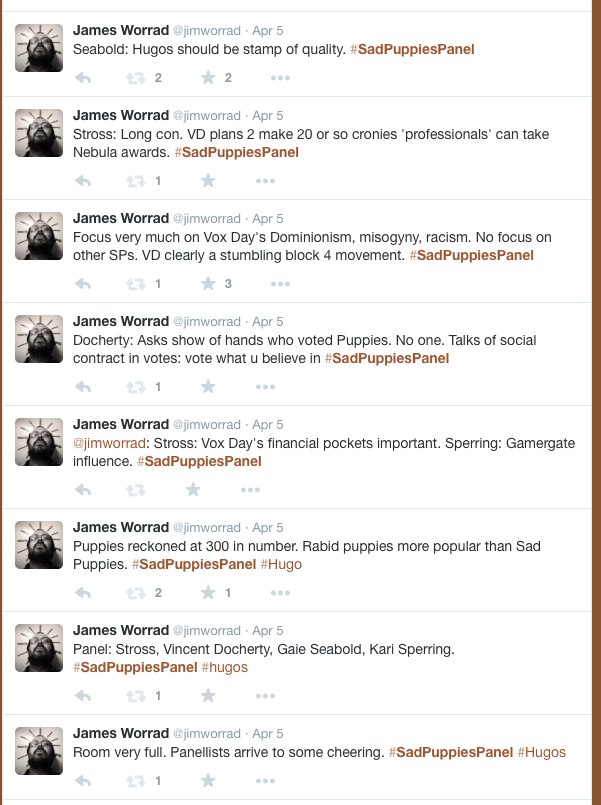 Personally, what I took from the room (aside from a program pamphlet some one had left on the chair next to me) was an atmosphere of bemused annoyance at the whole thing. Bear in mind this was no Wiscon-esque affair:  the majority were fairly moderate in outlook, I suspect. Their animus seemed rooted in a venerable institution (and a great way of discovering great SF books) being overtaken by internet demagogues for their own preening self-interest and the right wing side of a culture war mainly being raged somewhere over the Atlantic.

Vox Day, Rabid Puppies leader, outshone everything. Simply everything. And when you have a man who believes marital rape doesn't exist and that many of our friends should be 'repatriated' overseas on account of their genetic inheritance it's not difficult to see why.

What IS difficult to see is why Larry Correia and Brad Torgesson, leaders of the Sad Puppies slate, ever hoped, and still hope, to get SF's middle on board with them. I'm left wing, but I can see how an awareness campaign for right wing authors in SFF might in theory be healthy (Few, if any, righty novels/stories have procured themselves a rocket in the last few decades). But in the wake of a spoilt, intolerant, attention-fixated moral weakling such a prospect seems impossible now. May as well have called the whole thing the 'Vox Day Show'.

The panellists were perceptive, calm and witty. A rare thing in all this fiasco. If you can find video footage of the event, or a better write-up than mine, check it out.