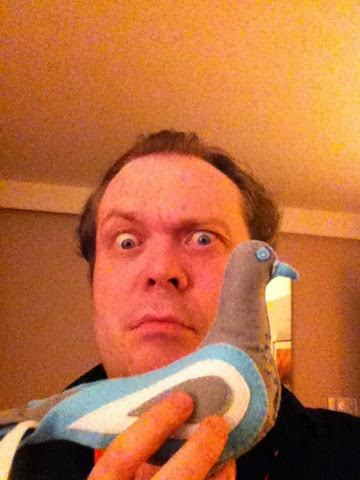 Of late you may have noticed the tumbleweed passing through this blog; the dust settling; the pile of crinkly plastic jaffa cake wrappers squatting on the coffee table. Technically it's called neglect.

There's a reason for this (aside from a habitual slothfulness that would make Leviticus drop its good guy act and get really huffy): I've got other stuff happening. Don't judge me; it's a malady that can strike anyone so I'm told.

Firstly I want to get on down with writing a novel--a space opera affair, working title Sisters In The Head (a working title because it's too much Like Aldiss's Brother In The Head) and I'm about twenty thousand words in, thanks for asking--and on top of that there's this wonderful world of independent movie making that keeps giving me popcorn. Creativity popcorn, lightly salted.

Something's gotta give. I'd rather put Pidgin on hiatus, end season one if you will, than carry it on as a lame, emaciated fowl. I haven't got a huge following by any means, but the stats dashboard and general online chat suggest a fairly loyal bunch of visitors and I respect y'all too much to ladle out thin, tepid gruel.

Trust me, it's better this way. The desire to write essay things and generally 'muck about' (another technical term) will hopefully propel me to finish the first draft of my novel at speed and, by the time I DO, Spool-P should come back with a whole heap of stuff. Ideas are being scratched down on notebooks and envelopes as we speak.

And, in truth, I imagine it won't be a total immersion in carbonite. I'll occasionally post self-serving pieces (notifications of new stuff coming out, places I may be etc), but not the self-regarding ones (everything else).

Well sod you, let's have a retrospective regardless. There was that time Spool Pidgin:

*: Explored the uncomfortablerelationship between SF and the Church of England

*: Tried to start a fight between theonline SFF community's two greatest fight-starters (Not my proudestmoment, admittedly, but...).

*: Looked back on the literaryqualities of missing lyricist and rock star, Richey 'Manic' Edwards,magnum opus The Holy Bible.

I hope you imagined that wobbly-wobbly reminiscence camera effect whenever you hit one of those links. Adds +5 to your nostalgia roll.

I'll miss blogging-proper. I believe blogging is an art form (yes I went there) that speculative fiction writers have thrived well in. I also believe we have far from mapped out its full potential and that we shouldn't rest on our laurels (to borrow a first century cliché). Arguably, as Spec-fic scribblers, it's one of our many duties.

So explore, my comrades, push! Make beautiful blogging mistakes! You have nothing to lose but your rants.