The Xenophobic Myth of The Swan Eaters. 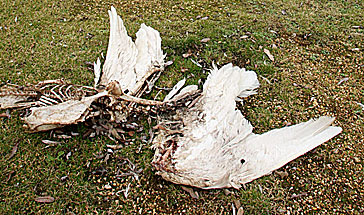 Today the Huffington Post UK spewed a non-news story about a dead swan. It had been found on a riverbank, seemingly cooked and half-eaten. Before I even read it I knew there would be a sense-defying, olympic-like leap unto the question of immigration.


I wasn't disappointed. Not by the comments that followed at any rate:

Eastern Europeans.........they kill and eat our freshwater fish too, soon we will have no wildlife left in this country

It has immigrants written all over it. wish they would all just jog on home and leave us alone.

reading the comments from many, I think most are suggesting foreign or hungry people, my opinion is on the first if it is foreigners doing this then maybe its time that our country implemented guidelines on our laws for people entering our country, by this I mean our government should make some changes to how we care for our own people, stop giving handouts to foreigners and give it to our own first, please do not allow them to stay in our country to destroy our wildlife, heritage etc. BRING BACK GREAT BRITAIN. There, enough said.


The Post, of course, were far too hip and internet to make the swan/immigrant connection in the story itself, but we can be certain they knew a dead river bird would be lively clickbait. The British media has form in this area.


Back in 2003, The Sun ran with the headline 'SWAN BAKE', attributing the mangled corpse of said bird to:


Always the same tale:  a swan cadaver is found, misty accusations are made, eye-witnesses avoid giving their names to the hacks and no individual--foreign or otherwise--is ever charged.


(Astoundingly, the very fact no one is identified or arrested only fortifies the myth; "Well of course no one was caught," the logic goes, "the police don't want to be seen as politically incorrect, do they?")


Mostly it is Eastern Europeans who get blamed (Lithuanians a few years back, though latterly Poles seem to be on the up-up), though back in 2011 my own city's imbecilearatti fingered Nigerians. I should add none of these countries has any tradition for eating Cygnus Olor.


The question no one ever asks is why these damn foreigners always butcher and prepare the beast at the scene of the crime? Wouldn't it make more sense to kill the swan, bag it up and take it indoors and away from prying eyes? That way you get to use the whole darn bird, rather than leave half of it uneaten.


So what's the truth?  Well, the sad fact is (brace yourself) swans die. I spent my childhood walking the family dog, Pieshop, along canals and rivers. Dead, gutted swans were a semi-regular sight (not to mention a welcome discovery for Pieshop). Perhaps it was the naivety of a boy, but I always put it down to foxes, true-blue British foxes; either killing the swan or ravaging the corpse of one that had died of its own accord.


('Wait Jim', you might well say, 'so foxes have lighters now? The swan in the Huff Post story was burnt, remember?'. Alright, I'll concede someone burnt a swan. But why does it have to be a Lithuanian  and not just some psychotic little native shit? And do I have to go through explaining, again, how the swan came to be half-eaten?).


I used to own an issue of Fortean Times (and I'm damned if I can find it now, in my flat or online) that investigated this urban myth. It turned out, apparently, that accusations of swan abuse go back to late 19th century Britain, popping up every time a new group of immigrants enter the country: Indians, Jamaicans, Jews, Gypsies: you name 'em and they've had a bite o' that finger-lickin' canal chicken.


It's easy to see the root of this national psychopathology. Swans are symbolic of the crown (though currently they are not protected by the Queen: another urban myth, that one) and, in earlier times, a delicacy of the nation's aristocracy. And, if you really want to wax Jungian, British-Celtic* folklore associates the Swan with Belanus, a sun god who would lend his strength to warriors in battle. The mythical swan-eater, then, is a savage wretch with no regard for our ways and a desire to sap our essence.


Is there a lesson to be learnt from all of this? Possibly not, save we're a nation of mouth-foaming, cygnet-fetishizing dullards under the yoke of a cynical fourth estate.


*- Yes, yes, I detest the C-word too:  an imprecise and romantic-soaked term for the many and varied cultures of ancient northern Europe. But, you know, short hand and all that.

Email ThisBlogThis!Share to TwitterShare to FacebookShare to Pinterest
Labels: Politics