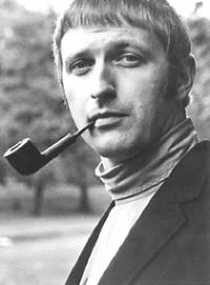 
Spool Pidgin did not in fact interview actor David Jackson. Truth is, he passed away some years back. He was a fine actor (aside from Gan, he does a nice turn as a vicar in overlooked sitcom Wyatt's Watchdogs, too) and, by all opinions I've read, a nice bloke too, with lots of stories about theater people. I like (and I hope) to think he would have understood and enjoyed this April fool. Indeed, David himself thought Gan was underused, though he saw the matter both philosophically and jovially from what I've read.

Why David Jackson? Well, of late, me and my pal Aanant love impersonating his voice whenever we're hanging out. Half of the stuff in the article is stuff we've ad-libbed when doing so. It's always been the sort of thing we do to pass an evening.

By way of example, Aanant's bro Attual clandestinely filmed us a few weeks back (you'll notice we cotton on about half way, then assume he's switched it off again!) and he's edited it down to highlights. Aanant was playing Mass Effect 3, and that's the general theme of our gibbering here. Also, I hasten to add we'd both been up for 18 hours (Me to get my sleep cycle back after doing nights and him playing trying to complete Angel of Death part 2 on Hitman: Absolution- Mass Effect was later recreation) and were puppets of coffee.

Anyhoo, our tale begins with me becoming possessed with the wonderful spirit of Mr David Jackson...