We wish to bring your attention to a scarcely discussed emergency, one with profound and unforeseeable consequences. It affects the future of humanity on this planet and probably many others (in that unlikely event we should ever get our arses into gear).

I am, of course, referring to the Hubbard-Cupboard. ‘Hubbard-Cupboard’ is a media-invented title (or at least it would be if they just pulled their lenses out of Kim Kardashian’s basque for five minutes) for Trementina base- a Scientology compound in New Mexico. It has a huge vault built into a mountainside.

It is there, allegedly, that the entire works of L. Ron Hubbard—Scientology’s founder, pulp SF author and nautically-fixated nutjob—are kept in perpetuity. Heavy perpetuity. Each and every feeble plot, purple sentence and self-pleasuring aphorism of this odd man has been engraved onto stainless steel.

Then encased in a titanium capsule.

You must surely understand our concern now. L. Ron Hubbard is set to outlast all other writers, artists, thinkers and historical figures.

L. Ron Hubbard is set to outlast all other writers, artists, thinkers and historical figures.

Indeed, given sufficient time, the only evidence for Earth civilisation will be the Hubbard-Cupboard and a plaque on the moon with Richard Nixon’s name on it. How’s that for a twofer?

Will YOU stand for that? Can you stand idle and allow such a world—where innocents from a post-apocalyptic future discover Hubbard and Hubbard alone? Where they wear cravats and orange wigs and bounce up and down on primitive sofas in praise of St Travolta?

No! We will not go gently into that weird night! That’s why, friends, we propose a Counter-Hubbard-Cupboard.

The Counter-Hubbard-Cupboard will offer our distant descendants a more objective view of their forgotten past, allowing them to choose between the guy who wrote Indigestible Triton or everyone else ever.

Your money decides how elaborate the Counter-Hubbard-Cupboard will be. Here’s what we believe we can achieve, given the cash:

$200:   For $200 we probably cannot build a Counter-Hubbard-Cupboard. But we can do the next best thing.

Hmm... engraving on stainless steel, eh, Scientologists? Well, a brief check of E-Bay proves two can play that game- Stainless steel cutlery sets for £5.95!  And it only gets cheaper the more we buy!!!
Our mate Kenny owns a key-cutting booth next to Leicester market. For £65 he will personally engrave the legend ‘TRUST NOT THE ONE CALLED HUBBARD’ onto each fork, knife and spoon we give him (His brother, Rob, who works there on Tuesdays says he’ll do the same deal but he won’t throw in some bootlaces like Kenny will. I suspect Rob belongs to Tom Cruise now). We can’t guess how civilisation will pan out, so I’ve requested Kenny engrave in English, Spanish, Mandarin and whatever they speak in Chad. All bases covered.

Armed with this array of truth-speaking cutlery we at Spool Pidgin shall travel the globe littering imperishable-looking locations with forks. Special attention will be given to the three-mile radius around Trementia base itself. No doubt Scientology keeps watch there, so, for this reason, we shall pose as a travelling band of Harpo Marx impersonators, cutlery ever-falling from our coat sleeves in a slapstick manner. Fool proof.

For this kind of money, we believe we can build a modest vault in the traditional style of a megalomaniac cult-leader terrified at the thought of his own oblivion.

The difference, of course, will be that we will fill it with books other than Hubbard’s (Let’s face it; Scientologists simply won’t think to do that. It would be too much like giving future generations a nice gift).

Amongst all this intellectual fruit of the ages will be found every work of science fiction superior to Mission: Earth (we envision a very big vault) so as to give context, plus a deep appraisal of Hubbard’s entire corpus by JohnClute. On top of all that we’ll probably throw a bunch of those ‘Trust not Hubbard’ spoons in there as well.

As for the Counter-Hubbard-Cupboard’s location, we quickly came to the conclusion it had to be somewhere both impervious to the wrinkly fists of time and an enigmatic monument that’ll fascinate as-yet-unborn generations. We settled for Leicester city’s newly-built Curve theater. 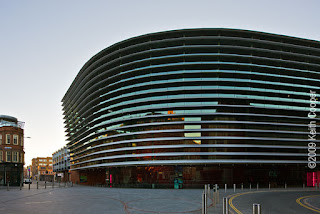 (Bit of a brainwave, this, actually. The beauty of it is, once Leicester Council cotton on to what we’re doing, they’ll most probably stump up a load of the required funds. They’ll look a right set of bastards if they don’t)
********************
UPDATE: Have Emailed LCC’s planning department. Email reads:

Dear council,
Please build (and pay for) a counter-Hubbard-Cupboard beneath the Curve Theatre. C'mon;  you’ll look a right set of bastards if you don’t.
Yrs,
Spool Pidgin

$17.4 Million: The big one. We call it the Counter-Hubbard-Cupboard-confusion-complex. It’s simplicity itself: we build FIVE underground vaults scattered across several continents, each of them of highly divergent design and style. Each of our vaults will not only contain everything in the $3.2 million version but also lengthy and elaborate descriptions of patently absurd religions and their creators, eg: St Ernest Borgnine and his proof all holidays are facets of a vast spine, or Robert Picardo’s yoghurt trances.

Thus, anyone who digs up Scientology’s Hubbard-Cupboard will believe it to be built by whatever culture built ‘the rest’. Case solved.

We thank you for your time.

(A Worrad/Gilbert/Chand enterprise. Valuations are given in dollars so that it looks like we know what we're doing)
Posted by James Worrad at 03:46