Thoughts on a Picture (A years a long time, huh?) 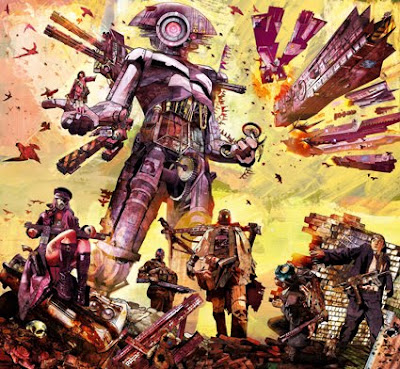 About a year ago I interviewed Warwick Fraser-Coombe on Interzone's website. Warwick, an illustrator with his own dynamic style and, I believe, a career to watch, had been asked to create a year's worth of covers for IZ. He hit upon the notion of creating one big-ass macropicture that would do the whole job by dividing into six standalones.

A fine plan, and a finer joy to watch it manifest throughout 2010- IZ readers looked forward to each issue in the hope of piecing the rusty, semi-automatic narrative together, one that began with a cycloptic robot, continued with spikey Diesel-Huns and the cast of Grange Hill, and resolved itself with a 5 year old evil despot.

So I bought a print of it. I got it framed. And realised I had no place to put it up.

A year later and, finally, I've remedied the matter. Something like this can't be left in bubble wrap, and so I decided to offer it to my pal Annant Chand and his enviable collection of bare, wide and personally owned walls. 'On loan' from 'The Worrad Collection' as it were. Postcards and coffee table books we'll be on sale in his front room. 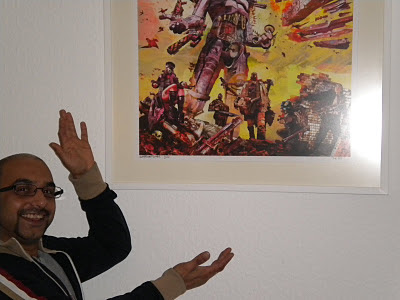 
Getting the picture up has given me a chance to reflect on its subject matter. To me, its a prophecy in abstract. Creepily so...

SF artists have a talent for prediction that can often outstrip SF writers, despite we qwerty-bashers getting all the attention in that department. An artist's future-sight is less conscious but can have a greater accuracy, taking, as they do, a handful of the modern world's thematic entrails and throwing them at a canvas.

A lot can happen in a year. Anyone living through 2011 can tell you that. Warwick's picture shows young civilians summoning courage to stand up against a titanic, power-ripe enemy. Their cause, seemingly, is both noble and necessary. It's certainly progressive. Close inspection of the work reveals both sides bear images of the game noughts and crosses (or 'tic-tac-toe', colonial chums). The difference is the bad guy's are all locked in an unwinnable status quo. The good guy's games (all of which are daubed on to public walls) offer the promise of change.

Warwick Fraser-Coombe's picture is Tahir square and Wall Street, Oakland and Misrata. It is 2011 seen from 2010.
Posted by James Worrad at 02:00