Yesterday, Sir Terry Pratchett died, and I’ve been moved by posts remembering the man, his warmth, his personality.

I met him twice. Once, at a signing in the 90s when I was working in a bookstore, long before I decided to finally write the darn Space Opera I’d been dreaming of for years. I’ve worked at a lot of signing sessions. Some authors were demanding, some warm, some forgettable. Terry was one of the most interested in his fans: personable, funny and warm. 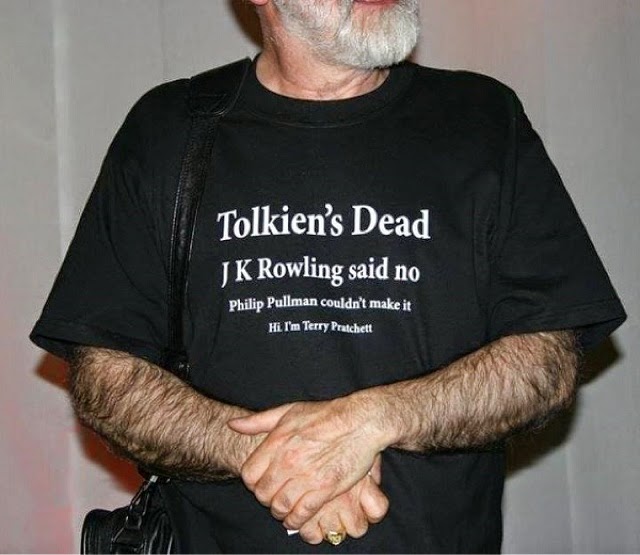 The session went on a long time, as I recall. People turned up with old books and new books, bookmarks and memorabilia, and he made no difference between those who’d paid for a hardback and those who’d bought a couple of bookmarks. He stamped books with ‘Can’t cook, won’t ook’ (Nanny Ogg’s hideously funny cookbook was one of the books on offer), posed for photos, and became, for me, a Writing God in one day.

I felt close to the community, a part of it, because I got his books:  I’d read them and laughed. In terms of me embracing the world of sff and being proud, it was up there with Tom Baker offering me a Jelly baby (I ate it, sadly. I should have kept and framed it…)

The second time I saw Sir Terry was at the end of a talk at the World Fantasy Convention in 2013. I hadn’t gone into the talk – standing room only – but waited outside in the crowd. Terry was very frail, shockingly so after I’d last seen him, but still great fun, swapping hats with the audience, telling jokes. Everyone knew, of course, about his illness, that his wouldn’t be a long sojourn with us, but there was nothing sombre in the mood, just enjoyment at his great character.

I’ve started this blog post a few times, planning to talk about the sff community, and its been a pretty soul-less affair, shelved and mulled on. I wanted to talk about how I’ve found my way into this odd little community, even though I live far from any centre of SFF. I planned to talk about websites and twitter and facebook groups, and all the reaching out on social media new authors are supposed to do. About how I have friends all around the world because of our shared love of the fantastic.

That’s not what the blog’s about, after all. It came to me that all my soundbites of advice, my mantras about ignoring the snafflements and nastiness that can abound, weren’t what I wanted to say. That this is going onto the person I know as J-Wo’s blog (because in my first, and still central, SFF community, that’s who he is) is fitting.

We see in Sir Terry’s death – and Leonard Nimoy’s not long before – what the sff community is.

J-Wo's one of the first people I got to know outside my close circle, who managed to be welcoming and share extensive knowledge of cons and people, and didn’t care if I was a newbie, only that I was interested. That, mostly, is the response I’ve had across the community:  that rising above differences, that lack of awe and levelling of surfaces.

Despite living in the middle of nowhere (or close to it), despite not having been published in long form (three weeks, everyone say eeeee!), despite being a female writer of very soft sf with an aversion to physics, I’ve been welcomed.

I’ve been looked after at cons, promoted, had a published author agree to do a blurb for me (and thank you, thank you, thank you if you’re reading, the amazing Francis Knight….), been mentored and supported, critiqued and edited, tweeted and retweeted. No one has been anything less than supportive.

We see in Sir Terry’s death – and Leonard Nimoy’s not long before – what the sff community is. I follow Pat Cadigan’s blog and see so much warmth and encouragement to her, it – a blog about cancer and hideous treatments and circling danger – is one of the most uplifting things I read and like.

If there are a few harder kernels in the community, if there are voices trying to cause division, I think that’s not the issue. The centre of our community is warmth, friendship, the (whisper it) slightly geeky conversations about worlds and authors and the occasional obsessive love of ray guns and the like. The acceptance of people brought together by a shared love of the fantastic.

Anyway, usually at this point I pop my blogs away and edit in a day or two but I think I’ll just send this one, in the knowledge that editing out thoughts that the loss of someone like Sir Terry brings might edit out something of the impact of that person.

Suffice to say, he was one of the first people in SFF to move me enough to feel I wanted to hang around and write the darn book and get closer, and we’ve lost one of our brightest, warmest, funniest stars. Let us keep the inclusivity he showed to his fans from every walk of life, and enjoy our place in the community, however we get to it, from whichever corner we inhabit. 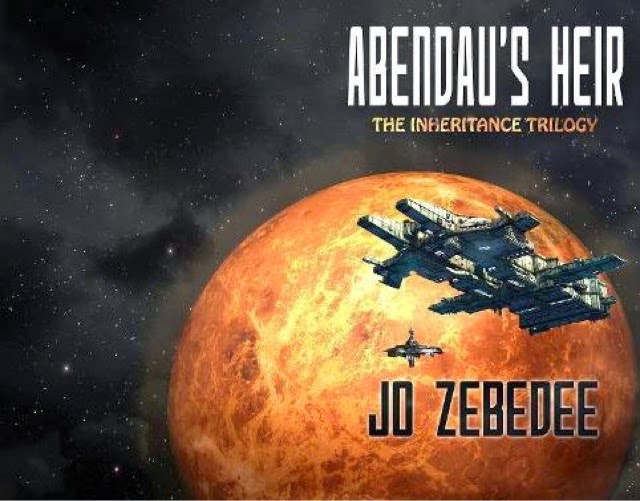 Jo Zebedee writes. Quite a lot. She’s also slightly obsessed with sexy space pilots and characters with dark little edges. She blames Han Solo and Kerr Avon for this.

Her debut novel, Abendau’s Heir, the first book of the Inheritance Trilogy, is out on 31st March 2015, from Tickety Boo Press.