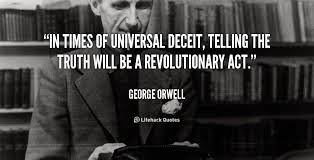 I was struck by the quote above when I read it on the Internet. It's quintessentially Orwell:  stark, to the point, against the grain. In fact I was glad others out in Webland had memed the quote as my brain hadn't retained it at all. And the quote's had quite a life out there... 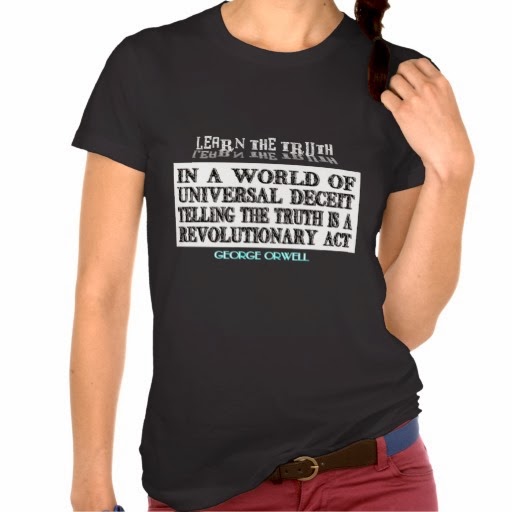 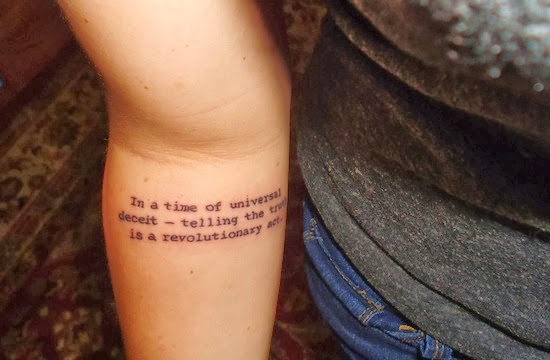 Well I'm glad whoever got that tattoo (if it isn't just a bit of Photoshopping) didn't put Orwell's name beneath. Because Orwell never wrote it. At least, Wikipedia can't find it in the original canon (Though the earliest appearances are in academic texts from 1982 and, fittingly, 1984).

It's far from the only Faux-well. Here's another: 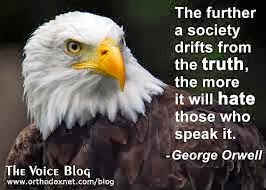 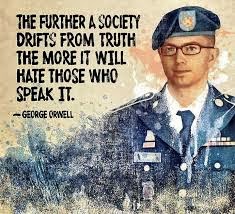 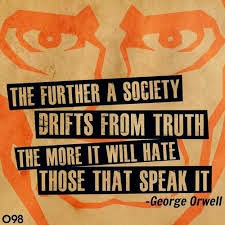 This one shares the same sentiment as the former and, for my money, was probably created by someone who once heard the 'universal deceit' quote but couldn't remember how it was phrased. A copy of a copy, if you will. Leastways, I haven't been able to find the source for this one either.

Both the above quotes are at least plausible (I can just about see 'The Guv'ner'* himself wishing he'd written the first). But check out this next one: 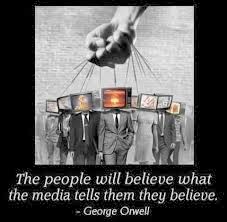 Here we have drifted into purest wishful thinking. As far as I can remember Orwell never used the term 'the media' in that sense, neither did most people back in the thirties and forties. More likely, someone with opinions on the current political landscape has replaced the term 'Big Brother' with a bogeyman of our own time. You have to wonder who the creator of this thinks George Orwell actually is.  The Smoking Man? 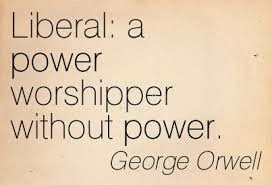 It's all over the web this one, but for the life of me I can't find a single recitation that can also give its source (a common result in this endeavor, I found out.). I've never known Orwell to use a colon so early in a sentence. He didn't have to: he wasn't in the business of making bullish memes. Even if he conveyed that idea somewhere in his journalism and this quote is a summarization you have to ask what George meant by 'liberal'. It's possible he was thinking more along the lines of David Lloyd-George than Al Gore. 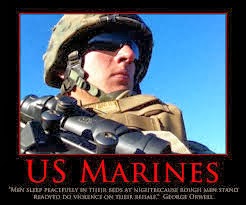 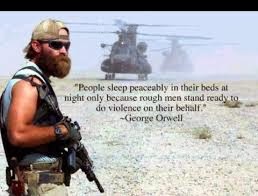 OK, here a sentiment has been wrapped in new words (please note each quotation above begins differently). Orwell did say this:


Yet in The Tribune column itself he's specifically referring to the British pacifist movement before and during World War II, a viewpoint that neither Orwell nor the general gaze of history particularly entertains (In another column he describes pacifism in the face of Nazi aggression as being more like a mental illness than a political outlook. That's in The Lion And The Unicorn I think. Feel free to look it up). If George Orwell had intended the statement to be a salute to the 21st century US marines or Duck Dynasty I'm sure he would have come to the point. He was good like that.

Also, note the faux-Orwell quote's use of 'rough men' and their opposite, the (presumably) soft men's insistence on lounging in bed. Orwell's statement has been stretched, Flanderized, pumped full of steroids. Orwell's pacifists are at least portrayed as active voices, not limp-wristed somnambulists in onesies.

The faux-quote reeks of the increasing divide in modern day US politics or at least the right wing narrative of it:  the muscular doers of conservatism--White America's survivalist Spartans--having to carry the great democrat dandy, ingrate that he is. And for lack of an Orwell they can truly use they will happily construct one.

On the other hand, my searches turned up almost as many left wing uses of fake quotes, if you count the Occupy Movement and the greater part of Wikileaks and Anonymous. And perhaps that hints toward the cause of Orwell's explosion across social media and the political spectrum simultaneously.

Both the Tea Party and Occupy are newborn sociological beasts, stumbling to walk upright. It makes sense their afterbirth-damp palms would scrabble for a post to lean on, especially one proven so dependable over half a century or more.

And that's what Orwell, or at least the image of him, is:  a dependable post, a firm-but-not-painful handshake, a neighbor whom you can lend your Black & Decker Workmate. Revolutionary movements can find inspiration in any person consensus deems a rebel.

One could get all cantankerous about all this appropriation and downright rapine, start screaming about he who controls the past, 2 plus 2 being 4 and all that stuff. But I don't know as if you can really fight it. Humans make stuff up. You know that.

I'm not as defeatist here as you might think. Not in the long term. I think we have to accept all the beloved writers of the modern era will accumulate spurious quotes and apocryphal tales. All part and parcel of being beloved. It was the same for Homer and the ancients, except this time round technology allows us quick access to the original material and its historical context. Orwell will remain long after our current political zeit has geisted. So I dare say all that accumulation has been rendered harmless.

Or, as Quentin Crisp once said about the state of his home, 'I find the dust doesn't get any worse after the first three months'.

*One bleary night me and my pals wondered why famous authors don't get rock statesmen-like nicknames such as 'The King' or 'The Boss'. The Guv'ner seemed spot on for George and it's just sort of stuck. Feel free to use it, though right wing libertarian types need not apply (not that I can stop you). To truly earn the use of 'The Guv'ner' one must have a general leaning toward democratic socialism (so we can identify each other from the tinfoil hat brigade on the web) and--and this is the inner sanctum as it were--have a dislike of sugar in your tea.