Clarion To Newcon To On And On: a story of a story (and a shameless plug) 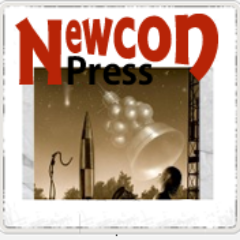 Well here's some news I've known for some time but still leaves me with delight:  I've a story appearing in a Newcon Press anthology. Now that's something that's been on my bucket list (what is a bucket list anyway? Ah, never mind, it's on it...) for a long while. For me, Newcon Press is the Subpop of the British SF story scene and coming from an old grunge kid that's high praise indeed.

The anthology, Noir, willo be launched at this year's Eastercon (6.00pm, April 18th) alongside its sister imprint, La Femme. I'll be there to meet and greet and generally stuff my gob with finger food.

Here's the table of contents for both books:

12. James Worrad – Silent in Her Vastness

I'm sure you'll agree we're talking pumping powerhouses pulsing with pen-wielding paragons' paragraphs here. It's an honor to be in such company.

Silent In Her Vastness is amongst my best work (for whatever that's worth) and has a special place in my admittedly vile and shriveled heart. I wrote it in week four of the Clarion Writer's Workshop, the phase of the course when a writer's brain reaches its imperial phase. My regular life had long become a distant dream and--under a Californian sun, dazzled by a thousand hummingbirds--anything seemed possible.

A sane sort of mania overtook me where my visual cortex kept being bombarded with imagery, near-future sort of imagery. Not prophecy, of course (I'm a fully paid-up member of the rationalist squad thank you), more my subconscious extrapolating possibilities from the news and media my conscious self kept digesting. China's economic rise, the west's economic decline, the Indian-Pakistan border, tablet computing, the state of higher education:  all in the mix.

A fascinating mental state:  wonderful to visit but I couldn't live there all the time. The world seemed a music video. In fact 'music video' is a nice analogy here. 'Silent...' has a verse-chorus-verse kind of structure and its prose-style was influenced by the new brutalist lyrics of both At The Drive-In's Relationship Of Command and Manic Street Preachers' Holy Bible.

They say it takes a village to raise a child and at Clarion 'Silent...' got pampered by a whole cohort of memetic aunts and uncles. At Clarion, seventeen or so hardcore pipe-hittin' SF writers get all Damon Knight on your manuscript's ass all overseen by a tutor who's an industry pro (that week of the workshop it was the inimitable David Anthony Durham who, in retrospect, was the ideal last say on this kind of story, given the man bestrides the twin worlds of spec-fic and lit-fic like some qwerty colossus).


'Silent...' had its idiocies and pretensions sanded down and, perhaps more importantly, its successes encouraged and teased out. In heaven all manuscripts get this treatment. I recommend Clarion to you all.

(As a side note, I should add 'Silent...' has since gone by many other eyes by then. All of which has been invaluable. One thing people keep telling me is that its very autobiographical. A compliment, because I've never considered it biographical at all!)

Jump two years. Well, not really. Writing isn't a cinematic montage. I sent the tale out to the usual places: the 'Big Three', the 'Substantial Seven', the 'Crazy Eighty-Eight' (turned out Uma Thurman had slaughtered that last lot: that's the biz for you). Probably ten venues in all received it in their inbox.

And here I want to make a point to all you would-be story scribblers:  when editors tell you your story isn't right for their mag THEY MEAN IT. Deeply, truly mean it. They're not lying to protect your ego, pal. Clarion taught me that truth. It made me confident enough to realize that, in all likelihood, my story wouldn't find a home easily and not because it was poor. It was just a bad fit for most venues.

So I put it to one side. And I knew if an opportunity came along it would see ink.

Ian Whates has a special place in my vile shriveled heart (turns out it's pretty roomy in there). Years ago, I went to my first SF con completely on my Jack Jones. I'd written a novel (let's not speak of that) and had screwed up my courage and gone to a weekend-long SF convention because I wanted to learn. I was fully prepared not to talk to anyone, merely attend the lectures (I later found out they were actually called 'panels') and learn a trade.

Within about two minutes of walking through the door some affable chap called Ian was talking to me. Talking to me like it was really not a bother. Ian, I later found out, is an individual of ceaseless encouragement and energy (Indeed, if the whole of the Brit SF scene got exiled to a desert island I dare say we could attach jump leads to him so we could read in the tropical night). The real surprise was Ian was no outlier:  con life is a continuum of smiles, open ears and unassuming outlooks. You should give it a go if you haven't already. They do day passes if a whole weekend seems too much.

As memory serves Ian saw my story, '+1', at Daily Science Fiction a year or so later. Ian is the editor and owner of Newcon Press (as well as being a tip-top novelist in his own right) and, later still, took a risk on asking yours truly to submit something to an anthology he was working on. I sent a couple of stories I thought might fit the gig and Silent In Her Vastness was one of 'em.

And here we are.

There's a lesson here. Two actually. 'Science fiction conventions are fun' is one of them. The other is that old canard about luck actually being the other side of hard work's coin (or whatever the bloody saying is. You get where I'm coming from anyhow...). Networking is extremely valuable (and fun), but it won't get you anywhere unless you've a pile of fiction at your elbow. It's not worth anything unless you, you know, actually write.

And that's the story of my story. The kid's all grown up and left home. I can't wait for the launch. I can't wait to see it in print, nestled amid all those other stories by so many writers I admire. The boy done good.

'Silent...', all being well, may reincarnate in another medium. Can't say what because that might jinx it. Just... you know... keep your eyes open. A story, it seems, is for life and not just for Clarion.

What? So what's Silent In Her Vastness actually about?

Oh that's easy to answer. It's about four thousand words.