True Tales From The Night Shift: The Drunk Wrestler

It was a quiet Friday night--2.15am--when the cops rolled up. The female officer came into the hotel's reception smiling. This, I have come to learn, is never a good sign.

She stopped smiling then. Clearly, I was wise to the game. She said OK and we both went outside. 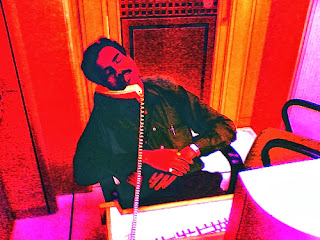 The Leicestershire constabulary never put a drunk in a cell overnight. Not if they can help it. Injuries, deaths, lawsuits:  these things have made it risky. These days, if the police can't drop a drunk off at home, budget hotels become their next port of call.

Tonight's drunk was silent in the back of the police car, staring at his knees. He was a Sikh--full beard and pagri--and he wore an expensive grey suit. Big guy.

"Okay," I said. "I'll take him." His body language, I thought, suggested a man unused to the back seats of a jam sandwich. A decent man stuck in a bad scene, his skull hitting the lead-heavy guilt phase of boozing.

The cops opened the door and persuaded the drunk out. He straightened up and my jaw went slack. He stood almost seven foot tall and his shoulders were near twice the size of mine.

We escorted him into reception. He almost toppled over at the front door. He nearly brought the officers down with him.

At the check-in desk the usual schtick again. I'd seen this scenario played out between cop and drunk in my reception many times.

"Your cash card. You have to pay for the room."

"Sir, we've a choice, haven't we? We can spend tonight in a cell or here in a nice hotel room."

"You can't, remember? You need to pay this nice gentleman, sir. Where's your card, sir?"

The drunk's wallet fell out onto the counter and the cops pulled his credit card out. The female officer slid it into the machine while the male officer held him up.

Me and cops helped him into room 2. We dropped his spirits-stinking carcass on to the bed. Then the cops got the hell out of there.

Things went quiet once more. Half an hour later I was dusting the stairwell when I heard a massive bang.

I ran into reception. The front door had been kicked open, its lock broken. The night's cold air licked at me. Heck of a kick.

I saw the drunk staggering off across the car park.

Nothing about any of this struck me as good.

I ran back to reception, snatched up the phone and speed-dialed the local cop shop. I grumbled at them at speed then ran back outside to see where my drunk had got to. He'd vanished.

Not good. And no way could I let someone saying "It's over!" to stumble off toward the motorway.

I ran toward the car park's entrance, took the shortcut over the lawn. No lights out there between the bushes and flower beds. I loped about in the darkness, not knowing where the lairy, kick-happy seven-footer was. I walked into him. Well, nearly. Eyes wide, the drunk instinctively lurched into some defensive combat stance.

"Woah!" I said, forcing out a chuckle. The friendliest chuckle. "Woah there, big guy!"

He mumbled and wept.

I had to change his gears, I realized. If only to buy time.

A look of deep wisdom ignited in his eyes. He took a deep breath. Then he posed like he was lifting a sedated baby rhino by its waist.

He grunted the affirmative, seemingly visualizing himself in the ring. The main thing was he was happy. It was my job to make sure he stayed that way. To that end I kept encouraging his wrestling schtick, cheering his every move.

Three minutes later he'd got me in a friendly headlock. He began to spin around with me and laugh. His armpit stunk of vodka and Calvin Klein.

A car came up the driveway. Not the police:  a red Nissan with a young couple in the front seats. It stopped beside me and the drunk.

"No," I said, the young woman vanishing and appearing to my view as the drunk span me about. "I'm afraid not..."

She eyed me suspiciously. "Your just saying that cuz that bloke's spinning you 'round."

"It IS a factor, madam," I told her. The drunk's kara bangle was digging into my neck. "I won't deny it."

The young woman huffed and told the young man to drive off. He did so, driving into our car park, turning around and cruising by us once more.

It began to rain. I thought about what life must be like working in a call centre.

Minutes later a cop car arrived. The drunk let go of me and got into the back of the jam sandwich when shouted at. He was still happy.

The copper--a testosterone victim with a spiteful mustache--was less so. He got on the walkie talkie and growled at someone about Leicester City cops dropping off drunks in Leicestershire cop territory. Again. He was of the opinion Leicestershire should give them a taste of their own medicine.

More cops arrived: a van with mesh windows. Two officers stepped out and approached me.

"Relax," the female officer said as if talking to a drunk. She hadn't seen the guy in the car's back seat. "Everything's okay. We're going to take you home."

I looked down at my hotel receptionist uniform--drenched and mud-stained--then back at her.

Email ThisBlogThis!Share to TwitterShare to FacebookShare to Pinterest
Labels: Tales From The Night Shift