Night Of The Revenger! 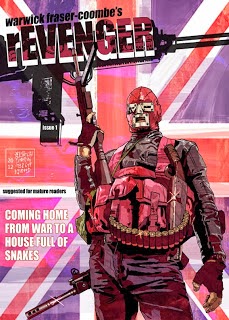 Some of you might recall I interviewed artist Warwick Frazer-Coombe on the TTA Press website about his cover work for Interzone magazine. I love this guy's artwork, with its dynamic and distinctive visions of worlds gone to pieces, and would look forward to the next cover of his year-long picture-reveal at IZ back in 2010.


Warwick's sharp vibrancy is a clear match for a graphic novel project. Evidently, Warwick knows this too:  here's episode one of the darkly comic, or comically dark (take your pick)  THE REVENGER, written and drawn by the man himself. 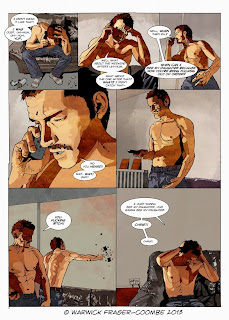 The Revenger concerns Roger, a highly-strung (and oddly naive) ex-squaddie back from the horrors of the gulf war. Donning a gimp mask (the inspiration for which seems unconsciously rooted in his marriage's breakdown), he decides to take out his post-traumatic distress and self-loathing on a rundown modern Britain. 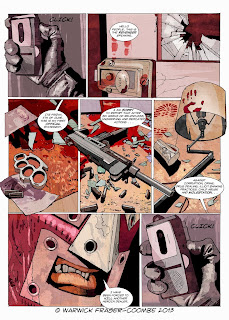 Taxi Driver meets Kick Ass with a dash of Mike Leigh perhaps (I note Warwick's use of tight or non-existent spaces between the frames lends it a clautrophobia and intensity reminiscent of the former). I can't shake the feeling this isn't gonna progress quite the way one might expect a vigilante tale to go, however. I'll be fascinated to see the next issue.
Posted by James Worrad at 13:40