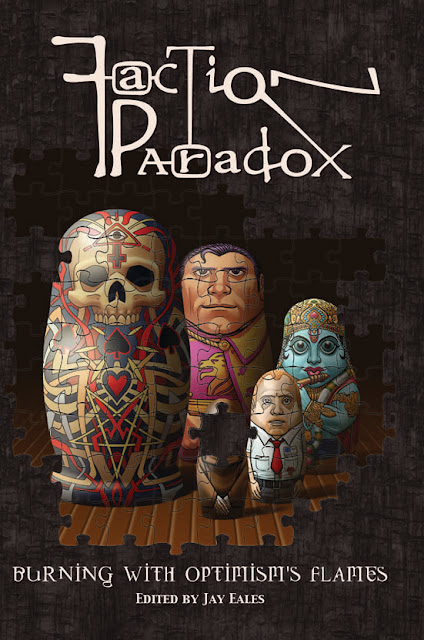 What a cover, huh?

It's my great pleasure to announce my story, The Strings, appears in the new Faction Paradox anthology, called 'Burning With Optimism's Flames'. You can get it from Obverse Books, here.

Great pleasure, because Faction Paradox is quite the institution. Faction Paradox came (as I understand it) out of those Dr Who novels during the eighties and nineties and--through sheer fan enthusiasm (and let's not forget many of these fans are also BAMF writers)--has become its own, erm... faction. Hmm... a far better explanation can be found here.

My story? It's technically a novelette, but that's mere tish, pish and pedantry.

Simply: One guy's noble quest to free his world from dogma and rule it. Others, manipulative Others, have different ideas.

Thematically:  It's a sort of homage to/critique of Fantasy/Planetary Romance, with half a tongue in its cheek. Someone else's.

Think of The Elric tales, the Dune series, Jack Vance (epic stuff from the 50's-60's period, basically) and the unconscious homo-eroticism, sado-masochism, colonialism and protagonist sociopathy inherent to that stuff and you get the picture. I was a quarter way through writing Strings when I realized it would be perfect for Faction and that their themes of manipulation zazzled well together.

Warning:  Story contains Starshark Semen. Because no prior SF writer has been brave enough.