Teresa Edgerton Interview (part one: Mucking around on the river) 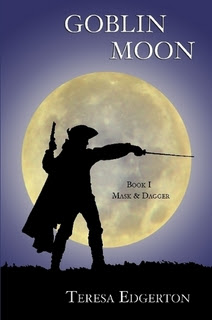 If you're anything like me, then if you ever read another book about meeting a bunch of high elves and facing a dragon you'll probably roll it up, shove it down a LARPer's throat and go and buy Skyrim instead.

But it doesn't have to be this way (and no one has to have tracheotomy of +1 enchantment either), because there are fantasy authors out there who demonstrate the genre is not some excuse to go scrumping from the orchard of Tolkien's legal estate. Far from it.

One such author is Teresa Edgerton. One of the radiant regents of the subgenre many call 'the fantasy of manners', Tad Williams said she 'works with the deft and loving touch of a Renaissance painter'. Her much loved novel Goblin Moon- a tale of wit, secret identities and workable pseudoscience in a world not unlike Georgian England (Wigpunk?)- is back out in paperback and kindle, both of which are probably wielding flintlocks yet talking politely.

Teresa was more than happy to give Spool Pidgin some of her time for a chat. Unfortunately, she didn’t stipulate exactly what time, and so midnight finds us in a flat-bottomed rowboat upon the river Lunn.
Thankfully the moon is full (if menacingly obese), because otherwise we’d be in total darkness. I row ineptly as Teresa sits on the stern, scanning the river for... well, I’m not sure exactly. Mindful of that gaff hook she’s holding, I decide to begin the interview...

Spool Pidgin: Your prose is decorative yet transparent; sort of like a stained glass window now I come to think of it. Finding a distinctive ‘voice’ is every aspiring writer’s Holy Grail- how did you find yours?

Teresa: Thank you. I like the stained glass metaphor. It’s very flattering.
Nothing remotely answering that description was there at the outset, and I worked at finding my style and my voice for a long, long time, over many years and many drafts. And to be honest with you, I tried imitating some of my favourite writers, one after the other. That part was arduous. Then, at a time when I was focusing my attention on other aspects of my writing, it just materialized. It literally happened that I stepped away from my typewriter one day, and I had no idea what my style or my voice was, or would be, and when I returned it was there waiting for me. I sat down and wrote three pages without stopping even once to think about whether it was bad or good. It felt authentic. It felt effortless, where everything before that felt forced and false. Then I looked at it.
It surprised me, because it wasn’t like anything I had tried before. It did, in a way, reflect everything I had loved reading over the years, and yet was not like any of them. The book went through several drafts after that, but that first section still stands practically unaltered.
Of course it’s not always that easy. For some writers, I think it very nearly is. At least, they’re able to turn out high quality work at a steady rate. Not me. There are days when I find myself agonizing over every word, and then the writing goes very slowly.

Any advice to anyone else trying to nail their own damningly elusive voice down?

Don’t try to find it; let it find you. Write, write, write, and don’t concentrate your efforts on stylistic tricks you pick up from other writers. You will find it only when you stop looking for it, and it may be completely unlike what you are expecting.

(A strange rustling comes from the western shore. Footpads? Hobgoblins? Frank Miller gone berserk and broken out of his blog? Spool Pidgin has no desire to find out. I row faster)
A mysterious stranger gives you a bookshelf. She tells you that if you leave any two books on the bookshelf overnight, they will ‘cross-pollinate’ and create a third book- a hybrid of both. What two books would you leave on the shelf overnight?

Pride and Prejudice and Treasure Island: I’d like to see how the Bennet sisters fare in less conventional surroundings. Plus, that would give them a nice break from all the zombies and sea monsters that seem to be afflicting Austen’s heroines of late. I shudder to think what the younger girls might get up to with a gang of pirates ... but that could be entertaining, too. 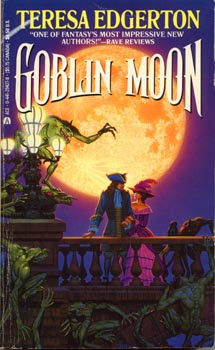 You also run a manuscript editing service. What are the most common errors you see in new writer’s manuscripts?

That’s a brave question to ask, since I’ve edited you.

Not really. I’m as confident of my fiction as I am the chunky crayon it’s written with.

Happily, you don’t have either problem: Too must drama or not enough drama, often both in the same book. Failing to recognize opportunities for conflict, tension, anticipation, or suspense that are organic to the story, and then manufacturing something out of bits and pieces of scenes from somebody else’s stories instead.

Erm... what’s that bobbing in the water over there?
I think you’d rather not know, James. When the water is this high it seeps into hidden vaults and other low, unwholesome places and brings up things that were better left undisturbed.

Yes, it, er, seems happy enough. Though it’s hard to tell, what with the jawbone missing. Anyway, moving on...
I’ve been reading the re-release of your cult classic, Goblin Moon (more of which later) and it’s got this wide buffet of rounded characters. In fact I’ll drop a simile right on top of that metaphor and say they behave as cogs: each character’s action turns the character next to them and the plot’s entire clockwork. Do you let characters dictate what’ll happen? They don’t seem the type to be pushed around...
For the most part they did what I wanted them to do – I suspect this was because it suited their own purposes to do so. Occasionally they would take over and startle me by the things they did, sometimes with actions that were so unexpected and unconventional they actually shocked me. One particular character in one particular scene comes to mind.

I suspect I know which one...
By taking things into his own hands the way that he did, he told me several important things about himself that I would never have guessed otherwise. I was delighted to have the information ... if delighted is really the word I want, all things considered.

You’ve really leapt into the internet age with aplomb (In a way, I suspect, that would be inadvisable with regard to this here river): ladling out advice and general approachability on the SFF chronicles forums and now self-publishing your contractually freed-up novels. Hmm... Actually, I haven’t really thought of a question here, it’s more of an observation. Feel free to comment!
This makes me laugh, because I am notoriously uncomfortable and inept with computers. Many years ago I found a place on the internet where I felt at home, and for the most part I settled down there, with occasional visits elsewhere. The only reason I felt brave enough to do that much was because I knew there was a safe place waiting for me. Now I’m publishing some of my own books it’s necessary to move well outside my comfort zone. I’ve leapt into something, but I don’t know exactly what as yet...

Another mysterious stranger (it’s a growth industry, I’m told) gives you a mail box with strange dials on it. These dials, once you get the hang of them, will send your manuscript (whether novel or story) to any publishing house in the last few hundred years. What period/ place/ publisher would you mail to?
Chapman and Hall, around 1850. It would be interesting to see if they would be interested in a fantasy novel that wasn’t a ghost story or a Gothic novel. If they were, it would be an amazing experience to be published by the same publisher as Charles Dickens.

Sure would. Ah, I think I see the lights of Thornburg - that majestic jewel upon the Lund - ahead! Leastways, I hope so...
In due course we make it to the docks and, after a brief and culturally vibrant encounter with the local watch (In which I’m required to hand over my new pair of converse trainers as part of some vague ‘port tax’), we press on...
Coming soon: Part Two. In which Spool Pidgin discovers more about Teresa’s exciting and efficacious novel Goblin Moon!
Posted by James Worrad at 02:41